This summer, Kashmir to fight murderers of another kind 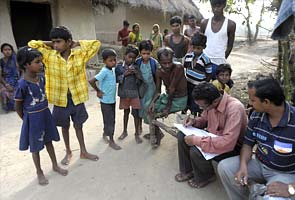 Shamed by the dismal sex ratio revealed by the latest census report, the Jammu and Kashmir government is trying every trick in the book to save the girl child in the state.

The census report, released in March, reveals there are only 859 females against 1,000 males in the state, a figure so dismal that it is next only to the two usual suspects, Punjab and Haryana.

Chief Minister Omar Abdullah was evidently distressed by this alarming trend. "We are the third worst state in this regard after Punjab and Haryana. If anything needed a mass movement and public appeals it would be this," he posted on micro-blogging website Twitter.

It was high time the state government woke up and launched a programme to combat the social evil.

"We have adopted an innovative way (to improve the sex ratio), we are telling people how girls are doing better in various examinations and how they are occupying high positions," Rattan Lal, a health department official, said.

The department has also sealed over 30 ultrasound clinics across the state and made it clear that any clinic conducting pre-natal tests would face punishment for violating the law of the land.

State Health Minister Sham Lal Sharma has also been seen reviewing the progress of the work done by his department in keeping a check on the menace.

"This had become necessary because female foeticide is murder and we cannot allow the murder of our generations. We must ensure that no child is killed in the womb of a mother," Sharma told the department in a meet recently.

The work is visible. Health department officials have started visiting houses and are telling people about the importance of the girl child.
The success of Ovessa Iqbal, the first Muslim woman from Jammu and Kashmir to have qualified for civil service, has also unwittingly helped the campaign.

"We are telling people that girls can rise to high positions and can serve parents and society much better than is thought," said Rattan.
But what have appealed to people most are the TV advertisements bemoaning the loss of the girl child.
"A multi-faceted approach has been adopted. Like people-to-people contact, generation of awareness among people, especially women folk that the girl child should be allowed to be born. In the modern-day world, girls are as good as boys, rather better than them," Sharma said.

Promoted
Listen to the latest songs, only on JioSaavn.com
Swarn Jamwal, a women's activist in Jammu, said: "We need to take concrete steps in this regard before the situation drifts further. Only lip service and words will not suffice."