Makar Sankranti 2017: The Tale Of Kite Flying From The Royal Quarters Of Rajasthan

Makar Sankranti 2017: Tourists in Jaipur revel in kite flying at the City Palace in the town. (PTI)

Jaipur: As the harvest festival of Makar Sankranti approaches, the blue skies of Jaipur are dotted with millions of colourful kites.

The tradition of kite flying here is rooted in a tale that began 200 years ago - which sees kites of all shapes and sizes held on an end by people wearing the choicest of clothes and a common glee on their faces. The winter winds do not seem to deter the people of this desert state.

Legend has it that Sawai Ram Singh II, a former Maharaja of Jaipur, was a keen patron of kite flyers in a town famous worldwide for its rich history of royal accounts. In 1835, after he became king of Jaipur, he invited all types of kite-makers to settle in the Pink City and gave them a market of their own. The king flew kites made of muslin cloth, with bells attached to them which would make a tinkling sound as they flew in the sky.

Pankaj Sharma, the curator and director of the Sawai Mansingh Museum trust, explains "The Maharaj enjoyed flying kites and when his kites in the sky would get cut, horsemen would be ready to ride out and retrieve them, and the one who rode back with the kite first was highly rewarded."

The tradition is still kept alive in the glorious palaces of Jaipur today. "It is our family's responsibility to carry forward tradition and promote our culture," said Padmanabh Singh, the 18-year-old scion of the Jaipur royal family. It is he who now inaugurates the kite festival at the city palace each year.

The family has brought in some changes with the kites' design. This year, they have decided to have stickers on kites with the message of Beti Bachao, asserted the royal. 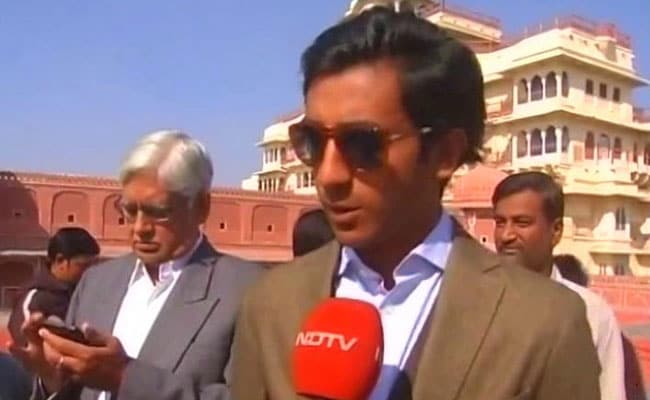 The heir of the Jaipur royal family Padmanabh Singh has given kite flying a novel message.

While the kites soar in the sky spreading the social message, the royal kitchen is churning out ultimate delicacies. People savour mouth-watering sweet dishes like til or sesame laddoos. The royal corridors reverberate with sonorous voices of folk singers mesmerising the royals with Rajasthani songs associated with the festival of Sankranti, also called Sakrant in the state.

The passion lives not just in the hearts of princes of the royal courtyards but among hundreds of commons folks living in Rajasthan's capital city. Around 116 kite flying clubs, housing many kite enthusiasts called patang baaz and kite flying ustaads, nurture the passion to this day.

An entire street in the old part of the city is dedicated to kites made by local artisans coming from a generation of kite makers. However, for the last few years, the kite makers have been facing stiff competition from shopkeepers selling Chinese manjhas or kite strings coated with glass shards to sharpen it. This has led to many accidents in the season over the years. Animal activists say that many birds get injured due to the dangerous strings. Old timers say, glass shards were absent in the hand-made kite strings. These strings can still be found in the kite bazaars of the old city.
Comments
Makar SankrantiMakar Sankranti 2017Padmanabh SinghJaipur royalsRajasthan historySawai Ram Singh IIHappy Makar Sankranti 2017Makar Sankranti Wishes

Woman Delivers Outside Jaipur Hospital As Doctors Allegedly Turn Her Away