At his wedding in Jaipur on November 8, Jitendra Singh was offered Rs 11 lakh on a platter by the bride's father. 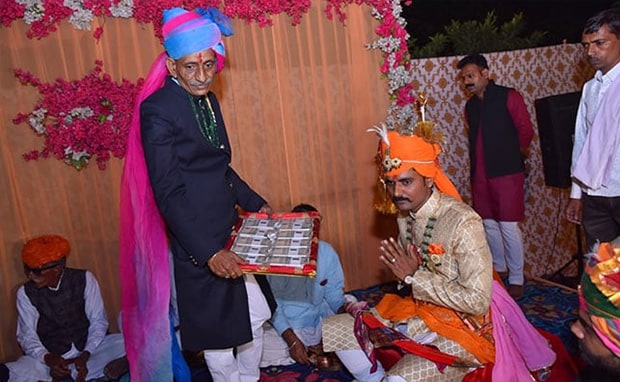 At his wedding, Jitendra Singh rejected dowry with folded hands.

A Central Industrial Security Force personnel in Rajasthan is winning praise for refusing to take Rs. 11 lakh as dowry at his wedding and instead accepting Rs 11 and a coconut from the parents of the bride.

At his wedding in Jaipur on November 8, Jitendra Singh was offered Rs 11 lakh on a platter by the bride's father. Mr Singh folded his hands and refused to accept the money. What he said next brought tears of joy to eyes to the bride's father.

"She is preparing for Rajasthan Judicial Services. If she becomes a magistrate, it will be more valuable to my family than money," he told the bride's parents.

Mr Singh's wife, a postgraduate in law, is now pursuing her doctorate. His parents want her to continue her studies.

Govind Singh, the bride's father said he was shocked when the groom refused the money that he offered him.

"I got jittery when he refused to accept the money. I thought that the groom's family was not happy with the wedding arrangements. Later, we came to know that they are completely against dowry," he said.

Over 4,800 Birds Died Of Botulism In Rajasthan's Saltwater Lake: Report