Justin Trudeau said amid applause, his government has declared January as Tamil Heritage Month in Canada. 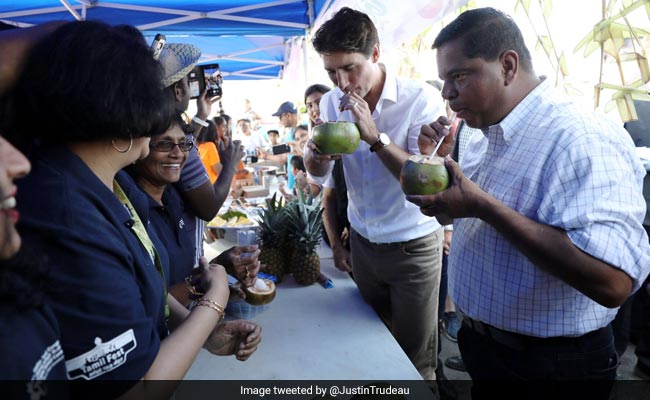 Toronto's Markham Road turned into a little Tamil nation on the occasion as hundreds of vends came up to treat visitors to rare tropical Tamil cuisine, displaying cultural items and offering rare glimpses into Tamil way of life.

Trudeau said Canada consistently raised its voice in support of Tamils during the ethnic war in Sri Lanka. Though the conflict has ended, he said, the long-term solution to Tamil grievances is yet to be reached.

He said the Tamil community has enriched Canadian multicultural society in a short period since its first arrival in large numbers in the 1980s. In recognition of this contribution, Trudeau said amid applause, his government has declared January as Tamil Heritage Month in Canada.

After attending the event, he tweeted:

It's an honour to be back at #Tamilfest, this time as Prime Minister, alongside @gary_srp. Vanakkam! pic.twitter.com/ahnine2zMp

Some rare forms of Tamil dances were also performed.

"People generally associate Tamil dance with bharatnatyam. But there are over 50 old forms of Tamil dance which very few know. These were showcased here for our future Tamil generation and Canadians," said Canadian Tamil Congress spokesperson David Poopalapillai.

A big attraction at the festival was one the two lifeboats in which first Tamil refugees (numbering 155) fleeing the Sri Lankan ethnic conflict had reached Canadian shores in August 1986.

It was the first time after 1912 that Canada accepted boat refugees who happened to be Tamils, Poopalapillai said.

"These refugees had reached Germany from Sri Lanka. From Germany, they took a ship, but were dumped in the ocean in two lifeboats to fend for themselves. Luckily, they drifted into Canadian waters off Newfoundland and were saved by Canadian fishermen," said the Tamil spokesperson.

Promoted
Listen to the latest songs, only on JioSaavn.com
The Canadian Prime Minister posed with some of those who were on the two lifeboats.

Numbering about 350,000, Tamils are one of the youngest and fastest growing communities in Canada, with their major concentration centred around the Greater Toronto Area.