Raj Aggarwal, who is India's Honorary Consul in Wales, has been given a rank equivalent to that of an army major. 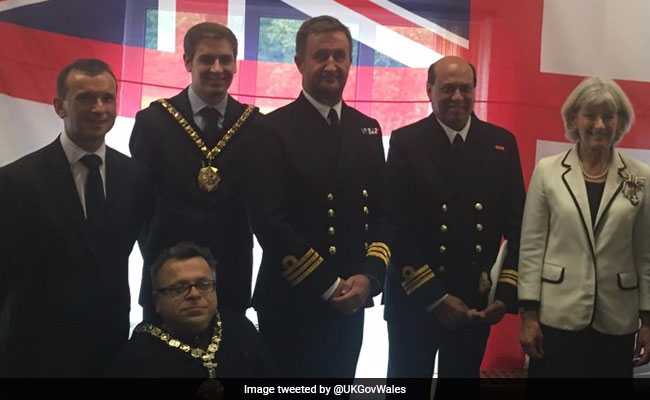 Raj Aggarwal (second from right) at an event to celebrate his appointment to the Royal Navy.

A prominent Wales-based businessman has become the first Indian-origin person to be appointed Honorary Lieutenant Commander in the UK's Royal Navy.

Raj Aggarwal, who is India's Honorary Consul in Wales, was appointed to his naval post by Admiral Sir Philip Jones following the formal approval of Britain's Queen Elizabeth II.

The move will see the pharmacist and healthcare expert take on the rank of honorary lieutenant commander in the Royal Navy, which is equivalent to the rank of an army major, and he will be affiliated to the Royal Navy ship 'HMS Dragon' in his new role.

"Raj is a great friend and advocate of the Naval service and his appointment will deepen the relationship between the community and the Royal Navy," Royal Marine Brigadier Graeme Fraser told the 'Wales Online' newspaper.

"Our Armed Forces are inclusive employers; we recognise the value of diversity and proudly serve all members of our communities at home and overseas. As the only Honorary Royal Navy officer in Wales, it is fitting that we celebrate his appointment. He will wear his Naval officer's uniform at the ceremony with pride," Mr Fraser said.

Each honorary officer is expected to bring a breadth of experience and make a contribution in their own distinct way to the Royal Navy. The official inauguration ceremony, which took place on Sunday on 'HMS Cambria' - the only Royal Navy base in Wales, was dubbed the Royal Naval Mela in honour of Aggarwal's Indian roots.

Mr Aggarwal said, "It is my great honour to accept this position in the Royal Navy as one of the 'special' honoraries. I want to use this position to create greater diversity in the Navy, to show the community that the Navy will be supportive and that there are amazing careers on offer, with first rate skills-training and opportunities to see the world".

Raj Aggarwal, chairman of pharma firm RK Aggarwal Ltd, migrated from Kenya to Wales in 1967 and studied pharmacy at Cardiff University before settling down in Cardiff.