Tulsi Gabbard To Hear Indian-Americans Amid Reports Of Presidential Bid

If she announces her candidature, she would be the first ever Hindu to be seeking presidential ticket from either of the two major political parties of the US - Democratic and the Republican. 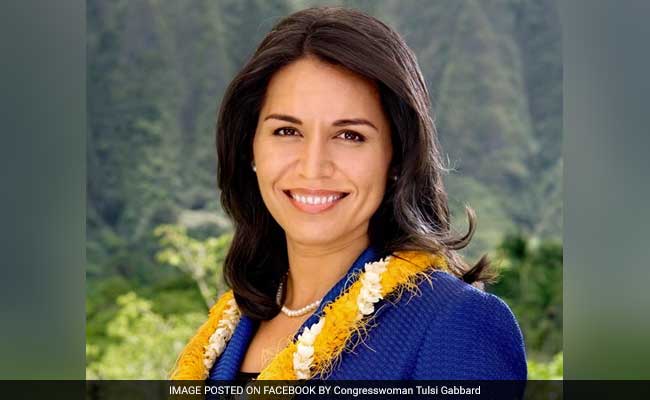 If Ms Gabbard announces her candidature, she would be first ever Hindu to be seeking presidential ticket

Tulsi Gabbard, the first Hindu lawmaker in the US Congress, is seeking views from eminent Indian-Americans from across the country on the possibility of a Hindu running for American presidency amid reports that she is considering to run for the White House in 2020.

Those familiar with the 37-year-old Democratic lawmaker from Hawaii said that a formal announcement could be weeks away or even before the end of the year.

If she announces her candidature, she would be the first ever Hindu to be seeking presidential ticket from either of the two major political parties of the US - Democratic and the Republican.

On Thursday, over half-a-dozen eminent Hindu-Americans wrote an email to some of the top members of the community from across the country to share their "thoughts" with Gabbard on "the possibility of a Hindu running for the US Presidency" for the first time in history and the "impact" that could have on the Hindu-American community at large.

According to a copy of the email accessed by PTI, Gabbard, who was this month re-elected for her fourth consecutive term in the House of Representatives with a record margin, is expected to be in a listening mode.

During a conference call, scheduled for Sunday, community members are expected to share their thoughts with Gabbard on the possibility and chances of a Hindu woman running for American presidency.

In addition, they are also expected to talk about the fund-raising potential of the community and what kind of logistics or voluntary support the community can provide to her in case she decides to run.

An Iraq war veteran, Gabbard, herself have maintained silence on this issue, but her team have been touching bases with potential supporters across the country. The just concluded November mid-term polls that elected a record number of women to the Congress seems to be a motivating factor as this indicates the desire of the Americans to have more women in elected offices.

Ohio Senator Sherrod Brown is the only Democratic leader to have come closer to announce the presidential bid. Along with Gabbard there are more than a dozen other Democrats who are seen as a potential 2020 candidate for the party.

After a grilling primary that begins in early 2020 and lasts for about six months, the Democratic presidential nominee would be challenging incumbent Donald Trump in the November 2020 presidential elections.

Among other potential Democratic candidates are Indian-origin Senator Kamala Harris, who as of now is seen to have a much wider base and support in the party than Gabbard. Other Democratic presidential aspirants said to the 2016 nominee Hillary Clinton, and Senators Bernie Sanders and Elizabeth Warren, in addition to the former Vice President Joe Biden.

It would be a big dilemma for Indian-Americans if both Senator Harris and Congresswoman announces their candidacy.

Another Indian-American Nikki Haley, the outgoing US Ambassador to the UN, has already said that she is not running for 2020 presidency and that she would support Trump in his re-election bid.

However, political pundits say her eyes are on 2024 presidential election. She is highly popular across the nation and considered to be a rising star of the Republican party.

Gabbard, who converted to Hinduism early in her life, is highly popular among Indian Americans and has nurtured this constituency quite well ever she announced her candidacy to run for House of Representatives from Hawaii in 2012.

Gabbard is not an Indian. She was born in American Samoa to a Catholic father (Hawaii State Senator Mike Gabbard) and her mother, Carol Porter Gabbard, is of Caucasian descent who professes Hinduism. Gabbard moved to Hawaii when she was two and embraced Hinduism as a teenager and is well-versed in the scriptures.

Currently she is the Co-Chair of the powerful House Caucus for India and Indian Americans. Her first visit to India was only after she was elected to the US House of Representatives.

In the 2016 presidential elections, she had supported Bernie Sanders and had even quit the Democratic National Committee to endorse the Senator from Vermont.

Her book, Is Today the Day? Not Another Political Memoir is scheduled to come out early next year. Sunday's conference with a select group of Indian-Americans would be her first serious engagement with the community on her presidential run.