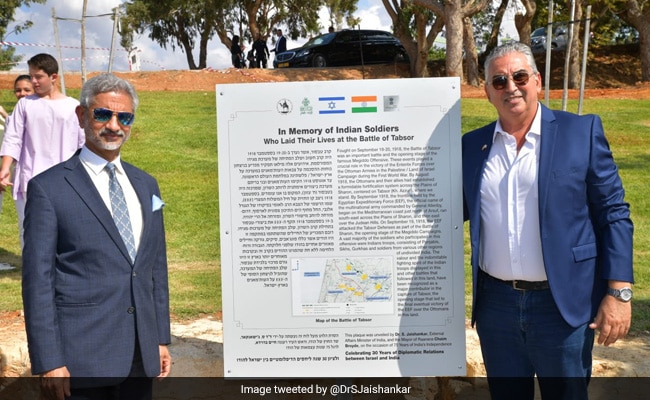 External Affairs Minister S Jaishankar on Wednesday unveiled a plaque at Ra'anana in northern Israel in the memory of Indian soldiers who laid down their lives in the Battle of Tabsor during World War I.

This is a step towards establishing an India Trail, marking the major points where Indian soldiers fought and paid supreme sacrifice in the line of duty in the region.

It is envisaged that the trail -- India's military great war path -- will involve six plaques at six places, of which Haifa and Ra'nana are a part. The trail is envisaged to be completed in 2022 to commemorate the 75th year of India's Independence.

"Unveiled the memorial plaque for Indian Army soldiers who fought at the Battle of Tabsor in the Megiddo Offensive of September 1918," Mr Jaishankar tweeted. "This is part of a larger India Trail that will bring out the role of our soldiers in shaping the history of this region," he added.

Unveiled the memorial plaque for Indian Army soldiers who fought at the Battle of Tabsor in the Megiddo Offensive of September 1918.

This is part of a larger India Trail that will bring out the role of our soldiers in shaping the history of this region. pic.twitter.com/YTVKdyARGU

Saluting the valour of the Indian soldiers who made the supreme sacrifice in the region, Mr Jaishankar said he is "honoured to visit the site of the famous battle of Tabsor of WWI at Raanana".

Fought on September 19-20, 1918, the Battle of Tabsor was an important battle and the opening of the famous Meggido offensive. These events played a crucial role in the victory of the Entente Forces over the Ottoman armies in Palestine during WWI.

A vast majority of the soldiers who participated in this offensive were Indian troops, consisting of Punjabis, Sikhs, Gurkhas and soldiers from various other regions of undivided India.

The valour and the indomitable fighting spirit of the Indian troops displayed in this and other battles that followed in this land, have been recognised as a major contributor in the capture of Tabsor, the opening stage that led to the final eventful victory of the EEF over the Ottomans in this land.

The plaque was unveiled by Mr Jaishankar along with the Mayor of Raanana, Chaim Broyde, as part of the 75th year of India's Independence and 30 years of diplomatic relations between Israel and India.

"When we look back and ask ourselves as to what we can draw from time as a source of strength to build our relationship, I think it is important to also look at other parts of our history and one of the less well known part relates to what we are commemorating today," Mr Jaishankar told the gathering at the event.

"The presence, the sacrifices of the Indian soldiers is not a story that has got the attention it should in our own countries nor in the world. As our relationship strengthens, it is important to realise how much in the past we have done for each other.

"It is also in some ways a segment of India's own growing global story as we set out to engage the world in a much more intense way and to explain to the world what our connections have been with it for many many decades," he noted.

Emphasising that Prime Minister Narendra Modi has "changed India's approach to those historical events...what we are doing today should be projected as a part of a greater trail, so that not only tourists from India and Israelis, but the world can follow the trail to understand what the history has been between us. It is a notable contribution to our relationship building," Mr Jaishankar stressed.

Eran Tearosh, Chairman of the Society for the Heritage of World War I in Israel also participated in the ceremony sharing details of the battle and its significance.

"It was a military masterpiece" in terms of "deception and execution" strategy, Tearosh said, adding, "We owe a deep sense of gratitude to the Indian soldiers."

He also expressed hope that an "India trail" would be created as part of the 75th year of India's independence and on the occasion of 30 years of diplomatic relations between India and Israel.

Describing Ra'anana as a friend of India, Broyde said with this unveiling and ongoing efforts "people will hear stories of this battle". He also expressed hope that there would be "no more wars and no more bloodshed".

During the event, which was attended by local people and people from the Indian Jewish community, local school children sang national anthems of India and Israel and a song, "you have got a friend in me".

Mr Jaishankar kicked off his five-day visit to Israel on Sunday by laying wreaths at a cemetery for Indian soldiers who laid down their lives in the region during World War I in Talpiot, Jerusalem.

"I am deeply honoured to pay homage to the valiant sons of India who fought with bravery and courage in this land during WWI, bringing glory to themselves, their comrades and their motherland," Mr Jaishankar wrote in the visitors' book.

"The valour and supreme sacrifice of these bravehearts will forever remain etched in the heart of our nation. Your heroism and selfless service is an inspiration and beacon of light that will forever guide us in the service of our country. I wish to thank you & Commonwealth War Graves Commission for maintaining these memorials for Indian soldiers in Israel," he wrote.

The heroics of the Indian soldiers have prominently come to light here during the past two decades and the story of liberation of the northern coastal city of Haifa, in what most war historians consider "the last great cavalry campaign in history", has become a household tale with its inclusion in the city's local history textbooks.

Major Dalpat Singh, widely known as the Hero of Haifa, was awarded a military cross for his bravery.

Indian cavalry regiments armed with spears and swords had displayed the highest tradition of valour and cleared the enemy from the rocky slopes of Mount Carmel.

In a symbolic gesture of friendship with Israel, India renamed the iconic Teen Murti Chowk, a war memorial, during the visit of then Israeli prime minister Benjamin Netanyahu to Delhi in January 2018 to Teen Murti Haifa Chowk.

Prime Minister Modi visited the Haifa cemetery during his visit to Israel in July 2017 and unveiled a plaque commemorating Major Dalpat Singh for his critical role in the liberation of the city.

The 61st Cavalry, the name given to the unit created after the merger of cavalry units after independence, sent a contingent to Israel in 2018 to participate in the centenary celebrations.

The Israel Post had issued a commemorative stamp in 2018 in appreciation of Indian soldiers' role in liberating the city.