No Concrete, Steel To Be Used For Building UAE's First Hindu Temple

Prime Minister Narendra Modi had laid the foundation stone for the Swaminarayan temple in 2018. 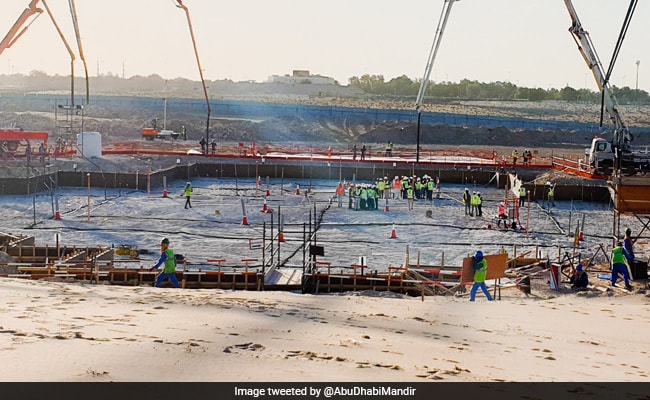 The Swaminarayan Temple will be built on the lines of traditional temple architecture in India.

The first Hindu temple in Abu Dhabi will not use any steel or ferrous materials and will be built on the lines of temples in India, committee officials have said.

Two years after the ground-breaking ceremony, the Swaminarayan temple of the Bochasanwasi Shri Akshar Purushottam Swaminarayan Sansth witnessed a major construction milestone as concrete was poured for its raft foundation on Thursday. A large number of Indian expatriates gathered at the site.

"Usually, (building) foundations have a mix of concrete and steel. However, as per traditional temple architecture in India, no steel or iron reinforcements will be used," Swaminarayan Temple committee spokesperson told news agency PTI.

Prime Minister Narendra Modi had laid the foundation stone for the temple in 2018.

Over 3,000 craftsmen are working tirelessly in India, carving icons and statues with 5000 tons of Italian Carrara Marble and the exteriors will be made of 12,250 tons of pink sandstone.

India's ambassador to UAE Pavan Kapoor and Indian Consul General in Dubai Vipul were present along with several prominent members of the Indian business community and members of the Community Development Authority (CDA), Dubai and Abu Dhabi, the Gulf News reported.

Mr Kapoor thanked the UAE government and said that it was a great privilege to visit the temple site for the first time.

Omar Al Muthanna, Chief Executive Officer at Dubai Community Development Authority, said: "Religion is a key factor to feel at home. The UAE is not a passing home. We want you to feel completely at home and this is our commitment to you."

The ceremony was conducted by Brahmavihari Das, the senior most saint of the BAPS Swaminarayan Temple group. Special prayers for the project and the UAE were said.

Addressing the gathering, the priest said: "This temple transcends the borders that divide us. It is destined to be a place beyond the limits that split us. It is something we have experienced within the depth of our souls in the UAE."