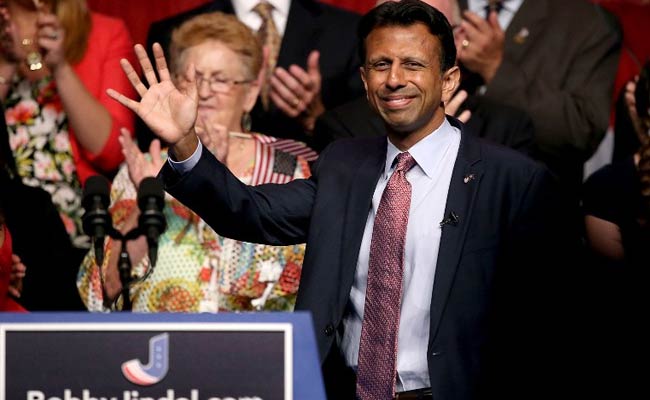 Louisiana Governor Bobby Jindal announces his candidacy for the 2016 Presidential nomination during a rally on June 24. (Agence France-Presse)

It's not been an easy day on Twitter for Bobby Jindal, Louisiana Governor, who joined the 2016 US presidential race on Wednesday as one in a very crowded field of hopeful Republican candidates.

"I am tanned, rested and ready for this fight," said Jindal during a campaign launch event held in a suburb of New Orleans, promising supporters that he would "rock the boat." He announced on Twitter,

My name is Bobby Jindal, I am the Governor of the great state of Louisiana, and I am running for President of the United States.

In his speech, Piyush "Bobby" Jindal said, "I'm sick and tired of people dividing Americans. And I'm done with all this talk about hyphenated Americans. We are not Indian-Americans, Irish - Americans, African- Americans, rich Americans, or poor Americans - we are all Americans."

The comment was interpreted by some on Twitter as another attempt to distance himself from his Indian roots and soon Mr Jindal trended on Twitter. But hours later, #BobbyJindalIsSoWhite was trending amid a storm of jokes and insults.

#bobbyjindalissowhite#Jindian He eats his Chapati with a knife & fork

#BobbyJindalIsSoWhite that he only uses Mr. white detergent powder to wash his white cloths.

The Indian equivalent to "Uncle Tom" will now be "Uncle Bobby." #bobbyjindalissowhite

The first Indian American to run for President, Mr Jindal had said in January this year, "If we wanted to be Indians, we would have stayed in India." He was explaining why he does not like to be described as an Indian-American.

I know that some say I talk too much about my faith. But I won't be silenced to meet their expectations of political correctness.

By Thursday evening there were 3,323 tweets around #BobbyJindalIsSoWhite.

Mr Jindal has also been mocked on social media for a hidden camera video his team has released in which he and his wife are seen telling their three children that he will run for President. The video has been panned for its shaky quality and awkward content.

"a very strange video. In it, he and his wife, Supriya, break the news to their three kids that he'll be spending... http://t.co/gvp5lvpOCl

A Jindal spokeswoman, Shannon Dirmann, alleged that the criticism of the video came largely from "liberals."

Bobby Jindal has 190 K followers on Twitter. The 44-year-old Mr Jindal was born in America to parents who emigrated from India. As a teen he converted from Hinduism to Christianity.