Indian Woman In US Separated From 5-Year-Old Son With Disability: Report

The Trump administration's controversial "zero tolerance" policy of separating immigrant parents and their children on the US border has resulted in the separation of nearly 2,000 children from their parents and guardians, sparking a public outcry. 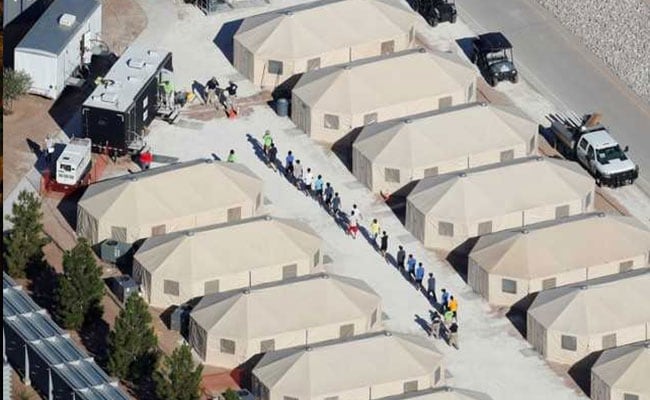 An Indian woman, who is seeking asylum in the US after she illegally crossed into America from Mexico, has been separated from her five-year-old differently-abled son, a media report said on Friday.

The Trump administration's controversial "zero tolerance" policy of separating immigrant parents and their children on the US border has resulted in the separation of nearly 2,000 children from their parents and guardians, sparking a public outcry.

Bhavan Patel, 33, was granted a $ 30,000 bond by an Arizona court on Tuesday, The Washington Post reported.

However, it was not immediately clear if she was able to join her disabled son.

This is the first known case of an Indian national who has been separated from her child in recent months under the 'zero-tolerance' policy.

So far more than 2,300 children have been separated from their parents after being arrested by the US law enforcement agencies after they illegally crossed the border.

After a nationwide outrage, President Trump signed an executive order that stopped the practice.

The Post did not reveal when she was arrested.

Ms Patel sat in an immigration courtroom, a tiny, solitary figure in a faded green prison uniform, the report said.

She fled left Ahmedabad, travelling to Greece and then Mexico before crossing the US border illegally with her disabled five-year-old son, Ms Patel and her attorney said during a bond hearing.

"Her son is not doing well," said her attorney Alinka Robinson, as a telephonic translator relayed the proceedings to Ms Patel in Gujarati, the daily said in its report from Arizona.

Alinka Robinson asked Judge Irene C Feldman to grant her client a $10,000 bond so she could "reunite with her son".

The prosecutor from the US Immigration and Customs Enforcement told the court that Ms Patel was a flight risk.

Thereafter the judge quizzed her about her path to the United States and whether she had paid a smuggler.

"An asylum officer had already found she had a 'credible fear' of being hurt or killed if she were sent back to India. She told the judge that her brother arranged her passage and that she never paid a smuggler," The Post reported.

The judge seemed skeptical and set bond at $ 30,000, making Patel one of the few separated parents at Eloy to have a bond set, according to detainees, the daily reported.

There is no official figure of Indians being detained in the US jail after they crossed the border illegally.

Recent media reports indicate that there are more than 200 illegal Indians - mostly from Punjab and Gujarat - in a four federal prisons in Washington, New Mexico, Oregon and Pennsylvania.

Indian Embassy in Washington DC and its Consulates in Houston, New York and San Francisco have sent its senior diplomats to all these federal prisons to ascertain facts and offer consular access to its citizens.

The public outcry in the wake of images and stories of the children caught in the middle of President Trump's immigration policy has sparked a fierce debate in the US.