Zoramthanga was administered the oath of office and secrecy by Governor K Rajasekharan at a ceremony in Aizawl. 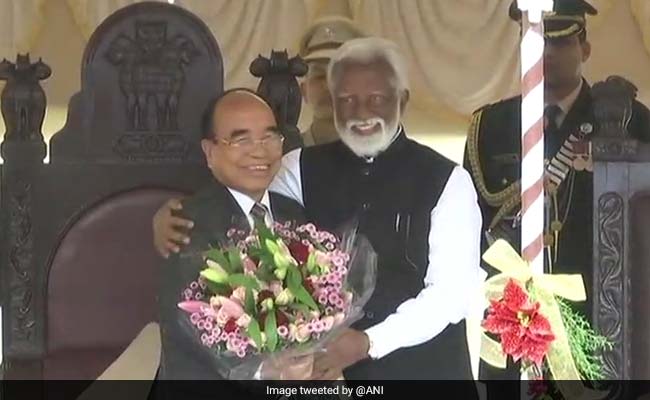 Mizo National Front (MNF) chief Zoramthanga was sworn in today as Mizoram's new chief minister, heading a 12-member ministry. He was administered the oath of office and secrecy by Governor K Rajasekharan during a ceremony at Raj Bhavan in Aizawl.

This is his third stint as chief minister of the northeastern state, having led the MNF government in Mizoram in 1998 and 2003. Mr Tawnluia will be the deputy chief minister.

Along with Mr Zoramthanga, 11 others - five cabinet ministers and six ministers of state - were also sworn in.

Chairman of Mizoram Kohhran Hruaitute Committee (MKHC), a conglomerate of 16 major churches in the state, Rev R Lalhmingthanga, read out from the Bible and offered prayers during the ceremony.

The MNF came to power in Mizoram capturing 26 of the 40 seats in the state assembly in the recently-held polls.