Odisha Teen Takes Us Back To History Of Bicycles With 3,653 Matchsticks

World Bicycle Day 2021: Do you know what a penny-farthing bicycle is? A teenager in Odisha took us back to the history of bicycles with matchsticks to tell us what it is 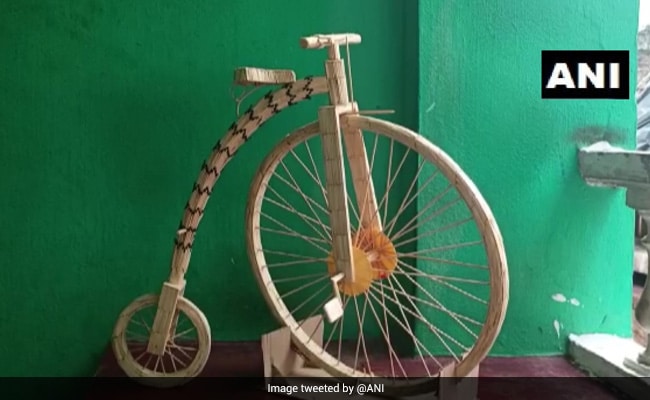 On World Bicycle Day, a teenager in Odisha took us back to history of bicycles with matchsticks. Saswat Ranjan Sahoo, 18, an artist from Puri, made an 1870 model of a penny-farthing bicycle, using 3,653 matchsticks. The bicycle is 50 inches in length and 25 inches wide. "It took me seven days to prepare this model," the teenager was quoted by news agency ANI as saying. The penny-farthing bicycle was commonly used in the 1870s and '80s.

"When I was studying in school, I saw this bicycle and was immediately attracted to it. I wanted to own such a bicycle but this type of bicycle is not available in our locality. So, I thought I must make this bicycle on the occasion of World Bicycle Day," Saswat Ranjan Sahoo said.

People are increasingly using bicycles to stay fit as cycling is one of the best exercises for all age groups. Bicycle are also eco-friendly and so the teenager went back to history of bicycles and made the penny-farthing model to raise awareness about bicycles.

Do you know why this model is called a penny-farthing bicycle? The name came from the British penny and farthing coins, the former being larger than the latter. The bicycle looked like the two coins when placed one after another.

Karl von Drais, a German baron, built a steerable, two-wheeled contraption in 1817. This was similar to the penny-farthing bicycle. According to the history.com, in 1885, an Englishman John Kemp Starley, perfected the design. It had wheels of the same size and a chain drive. More innovations followed and the bicycle got its brakes and tires, and the "basic template" of what we see as the modern bicycle.