With Robert Vadra And Karti Chidambaram Inside, Busy Day For Probe Agency 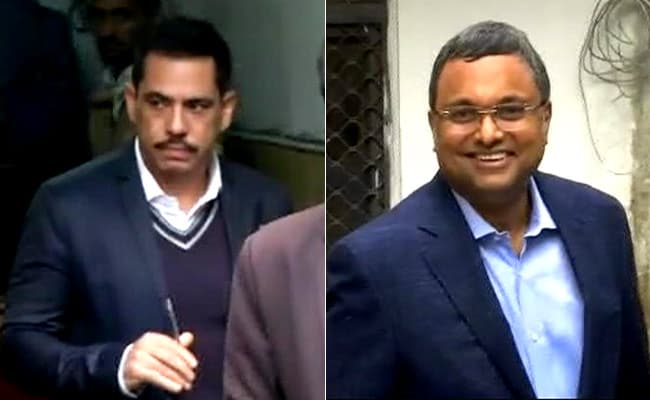 Both the men are being questioned by officials of the financial probe agency in separate cases.

On Thursday mid-morning, all eyes and cameras were focused at the entrance of the Enforcement Directorate office in central Delhi's Jamnagar House to capture Robert Vadra's entry. He was asked to be there at 10:30 am.

At around 11 am, there was a flutter when a car reached the agency's office, with the media crews shouting, "Vadra aa gaya (Vadra has reached)". The blazing-wearing person walking into the office turned out to be Karti Chidambaram.

Twenty minutes later, an SUV reached the entrance of the office. This time, it was Robert Vadra inside the car.

Mr Vadra appeared before the agency for the second round of questioning in connection with a probe into allegations that he bought properties in the UK, bought illegally through kickbacks received in India when the Congress-led UPA government was in power. He was questioned for five hours yesterday during which he denied the allegations and termed them a political witch-hunt against him.

Priyanka Gandhi Vadra, who dropped him outside the agency's office yesterday, made it clear that backs her husband. "I stand by my husband," she told NDTV. The businessman was asked by a Delhi court on February 2  to appear before the central probe agency and cooperate in the probe after he approached the court seeking protection from arrest.

Karti Chidambaram, meanwhile, is being investigated by the Enforcement Directorate and the CBI in several cases, including the one relating to Foreign Investment Promotion Board (FIPB) clearance to INX Media for receiving foreign funds to the tune of Rs. 305 crore when his father, P Chidambaram was the finance minister.