Supriya Sule was part of all the meetings and the negotiations that her father Sharad Pawar did towards the formation of the government. She was also instrumental in pursuing Ajit Pawar back to the party fold. 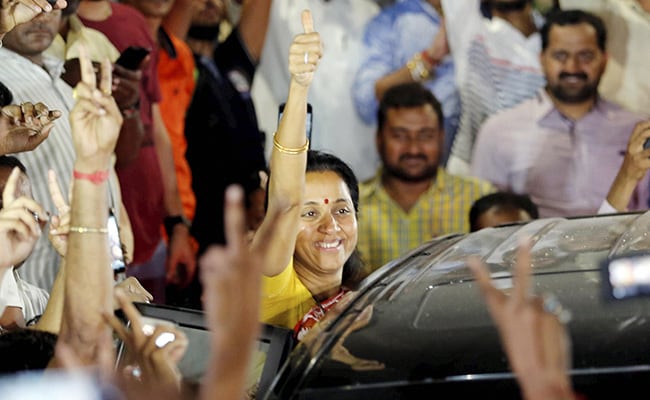 The optics in the Maharashtra Vidhan Sabha have set the Nationalist Congress Party (NCP)'s internal dynamics straight with Supriya Sule receiving the newly elected MLAs before the start of the first session on Wednesday, and she welcoming and hugging estranged cousin Ajit 'Dada' Pawar.

With Ajit Dada Pawar being pushed to the fence, Supriya Sule is at the centre stage of the NCP now.

She was part of all the meetings and the negotiations that her father Sharad Pawar did towards the formation of the government. She was also instrumental in pursuing Ajit Pawar back to the party fold.

After the Saturday coup, Sule immediately changed her WhatsApp status -- 'party and family splits'. It now is clear that the saga of the Pawar family will rotate around Supriya Sule.

The high profile rebellion within the Pawar clan is being seen as the direct fallout of Sule's gradual elevation in the party, first in the Rajya Sabha and then to the Lok Sabha. Until then Ajit Pawar had a free run in the NCP affairs.

As the clout of Supriya has gradually increased in the party, Ajit Pawar had been upset for quiet sometime said an NCP insider. In the past few days, Supriya Sule was part of the hectic activity and even close Pawar aide Praful Patel was missing.

As Sharad Pawar emerges from shadows to becoming the strong Maratha, Sule will be the next heir apparent in the NCP.

Pawar on Tuesday walked in amid loud cheers at hotel Trident where Uddhav Thackery was elected as the leader of the three parties.

During the negotiations Pawar had made it clear that he was a tough bargainer, before reaching out for the deal. The path was not easy as it seems now -- Pawar had pushed for a rotational Chief Minister in the state, but the Shiv Sena insisted on a full five-year term for them. Then, Uddhav Thackeray's nominees for Chief Minister could not find any takers, including the name of his son and first-time MLA, Aditya Thackeray.

In this entire episode, Pawar kept the suspense on till Friday when he announced that Uddhav Thackeray will lead the coalition. Before that, he was intentionally evasive, saying at one point of time that he did not know who will form the government, and then on another occasion, he said that the (then) BJP-Shiv Sena alliance had got a mandate to form the government.

Meanwhile, as the Sena, Congress and NCP were reaching the final stage on the Common Minimum Programme, Pawar met Prime Minister Narendra Modi in the presence of Home Minister Amit Shah and what transpired between them is not known.

As the three parties agreed on Friday that Uddhav Thackeray will be the Chief Minister, NCP spokesperson Nawab Malik said: "Pawar Sahab has defeated the Chanakya of modern Indian politics", in a jibe at the BJP chief and Home Minister Amit Shah.

Though Ajit Pawar's flight to the BJP camp on Saturday morning was shocking for the Pawar family and party, Sharad Pawar kept his cool and managed to quell the high-voltage revolt thereby proving that he is a seasoned political operator.

Sharad Pawar who had been contemplating retirement for the past few years, managed to pull the scene with his astute acumen and has shrewdly manoeuvred a favourable situation that will help in settling his daughter, Supriya Sule as the top leader in the NCP.