Mansukh Lal Mandaviya was minister of state in charge of Road Transport and Highways, Shipping and Chemicals and Fertilisers in the previous Modi government. 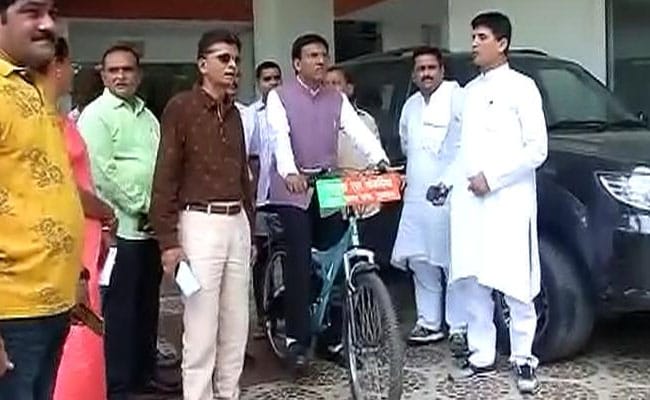 Mansukh Lal Mandaviya is known for riding his bicycle to parliament

The 47-year-old was minister of state in charge of Road Transport and Highways, Shipping and Chemicals and Fertilisers in the previous Modi government.

BJP president Amit Shah this made calls to the leaders who will be ministers in the government.

"Narendra Modi ji and Amit Shah ji have shown trust in me once again and invited me to be a part of this government. I am grateful to both of them," he said.

Mr Mandaviya riding his bicycle to parliament had been a familiar sight over the past five years.

Asked if he will go for the swearing-in ceremony at Rashtrapati Bhavan on a bicycle, he said: "For me it is not a fashion to go on a bicycle, it is my passion. I had always gone to the Parliament on a bicycle."

He explained why. "It is eco-friendly, it saves fuel and keeps you physically healthy," said Mr Mandaviya, who has been in parliament since 2012.

Before being nominated to the Rajya Sabha, Mr Mandaviya was a member of the Gujarat Legislative Assembly from 2002-2007.

The politician from Bhavnagar district in Gujarat describes himself as a businessman, agriculturist, political and social worker.