The meet - where Raj Thackeray unveiled the party's new flag and launched his 27-year-old son Amit Thackeray - made it clear that the MNS has recalibrated its approach, moving from championing the cause of Marathas to consolidating its Hindutva credentials. 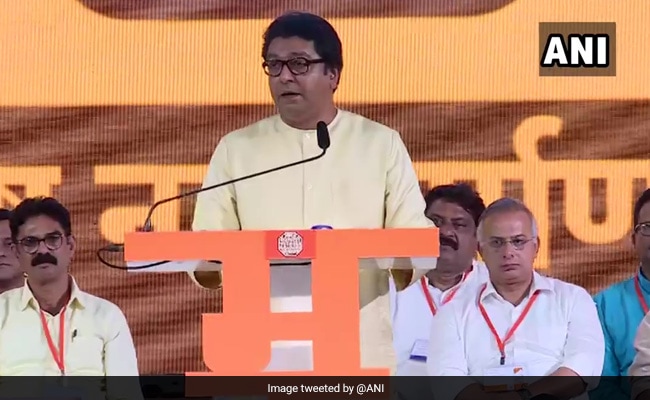 We will take out a huge rally on Feb 9 to drive illegal infiltrators out of India, Raj Thackeray said.

The words of Raj Thackeray - the chief of Maharashtra Navnirman Sena - are expected to have brought cheer in the BJP camp on Thursday. He spoke not only of supporting the contentious citizenship law CAA, but also gave a call to arms, expanding his focus area from local to national migration.

"We will take out a huge rally on February 9 to drive illegal infiltrators, from Pakistan and Bangladesh, out of India," Mr Thackeray said at a mega meeting at Mumbai suburb Goregaon.

"We have to be tough with infiltrators. We are sitting on a volcano. It can erupt anytime. We can keep working on CAA/NRC. We have to throw out Pakistani and Bangladeshi immigrants. I will support the government on this," he added.

The meet - where Raj Thackeray unveiled the party's new flag and launched his 27-year-old son Amit Thackeray - made it clear that the MNS has recalibrated its approach, moving from championing the cause of Marathas to consolidating its Hindutva credentials. His opening words were "My Hindu sisters and brothers gathered here" instead of his usual "My Marathi sisters and brothers gathered here".

Since its inception in 2006, the focus on regional politics has yielded low dividends and seen his party shrink in numbers. The party sat out the national election.

There has been speculation that the BJP will support Raj Thackeray in rebranding his party after the Shiv Sena joined hands with the Congress and NCP to form a government in Maharashtra. For the BJP, this appears the way ahead after Raj Thackeray's cousin Uddhav Thackeray's Shiv Sena broke its 35-year alliance with the party and formed government with the Congress and Sharad Pawar's Nationalist Congress Party after last year's assembly elections.

"It takes a Thackeray to fight a Thackeray," a BJP leader privately admitted, indicating a stage set for a Sena vs Sena battle that is expected to help the BJP gain.

The address of Raj Thackeray - who turned a bitter critic of Prime Minister Narendra Modi and the BJP and tried to enter the opposition camp ahead of the election -- dropped more direct hints of the change.

"I have criticised Modi when he was wrong. I praised him when he abrogated Article 370. When Ram Mandir verdict came I said Balasaheb must be smiling. But why should we tolerate infiltrators? There are protests against CAA across the country. How many Muslims in these protests are from outside? Why should we stand for them?" he said.

There was also a swipe at his cousin Uddhav Thackeray. "I don't change colours to form government," Raj Thackeray declared, and a word about people he called "honest Muslims".