Why UAPA, The Law Used In Activists' Arrests, Is Hugely Controversial 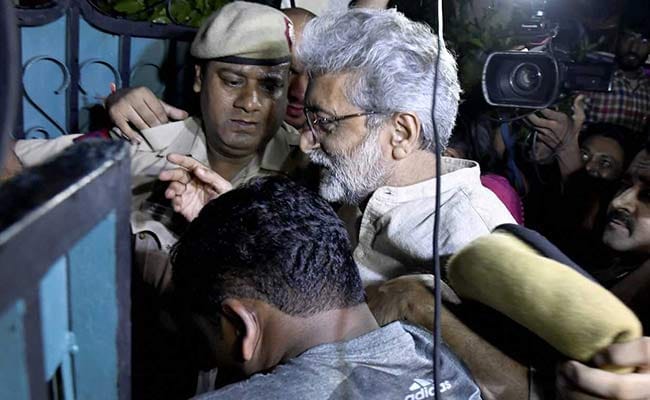 The arrest of five activists after multi-city searches at their homes last evening has been widely condemned amid allegations of the use of an oppressive anti-terror law that empowers the state to search and arrest people without a warrant. Poet and Maoist ideologue Varavara Rao, lawyer Sudha Bhardwaj, and activists Arun Fereira, Gautam Navlakha and Vernon Gonsalves, have been charged under the UAPA or Unlawful Activities Prevention Act.

They were accused of links to Maoists accused of a role in the clashes between Dalits and upper caste Marathas at Maharashtra's Bhima-Koregaon village near Pune during an annual celebration on December 31.

"They seized my mobile, laptop, pen-drive...I am sure they will play around with my data. My Twitter and email passwords were taken," said Sudha Bhardwaj, human rights lawyer, who is under house arrest. Her daughter said the raid team came without a search warrant.

The UAPA, introduced in 1967 to "safeguard India's integrity and sovereignty", authorizes raids and arrests without warrants if a person is suspected to "support terrorist acts or unlawful activities". Any official can seize material during such raids. The accused cannot apply for bail and the police have 180 days to file a chargesheet, instead of 90. In June, five other rights activists were arrested under the same law.

A particularly controversial part of the law is that members of organisations that the government believes are "unlawful associations, terrorist gangs or terrorist organisations", can be arrested.

One of the five held yesterday, Mumbai-based activist Arun Feriera, was arrested earlier in 2007 - when the Congress-led government was in power - and branded an "Urban Maoist", lawyer Prashant Bhushan tweeted.

Mr Feriera was acquitted in all the cases, but had to spend five years in jail.

Activists, lawyers and prominent voices have also condemned the manner of the arrests.

Dramatic events continued well past midnight as the Pune police allegedly tried to take away Sudha Bharadwaj in defiance of a court order. The Punjab and Haryana high court had barred the police from taking her to Pune, ordering that she be kept under house arrest till August 30. Her lawyers said even after the high court's order, the Pune police whisked her away.

Ms Bhardwaj was kept in a car as a local magistrate decided on her case. Around 1 am, the magistrate asked the police to comply with the court order and keep the lawyer activist in house arrest.

A relative of poet Varavara Rao alleged that the Pune Police had "forced" him and his wife to sign a police document on charges against him in the Marathi language, which he doesn't know.

Varavara Rao was arrested from his home in Hyderabad.