What Is Jallikattu? All You Need To Know About Tamil Nadu's Bull-Taming Tradition 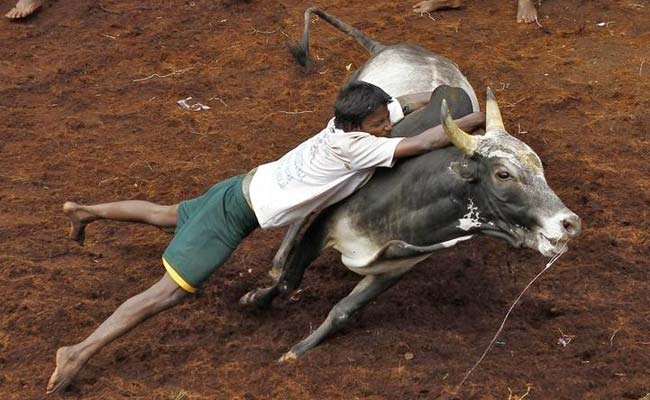 Jallikaatu could be referred to as bull taming event typically practiced in Tamil Nadu as a part of Pongal celebrations on Mattu Pongal day, third day of the four-day Pongal festival. The term 'jallikattu' is derived from the tamil words 'jalli' and 'kattu'.  Jalli refers to gold or silver coins. Kattu means 'tied'. Therefore, combined together it refers to coins being tied to the bulls' horns, which is considered the prize for whoever tames the bull. The bull that wins is used to service numerous cows preserving the native breed. It is renowned as an ancient 'sport', believed to have been practised some 2500 years ago. It is controversial because the sport often results in major injuries and even deaths.

Why the sudden outrage?

Last year, the Environment Ministry amended its earlier notification, initially issued by UPA in 2011, and declared that the sport could carry on irrespective of the imposed ban. This was seen in direct contravention with the Supreme Court's order and was challenged by organisations such as People for The Ethical Treatment of Animals (PETA). Consequently, a stay order was issued by the court.

A research conducted by PETA's investigators found that the bulls were being disoriented, deliberately. The bulls' tails were allegedly bitten and twisted; stabbed, punched and dragged on the ground. PETA's campign was vocally supported by celebrities like John Abraham and Hema Malini, who played an integral role in standing for the ban against Jallikattu.

Why is PETA keen on banning Jallikattu?

In January 2016, the Central Government lifted the ban on request of Tamil Nadu Government. This notification was challenged by PETA and Other such welfare Organizations in the Supreme Court. PETA insists that 'cruelty' is not limited to slaughter but includes unnecessary suffering and torture induced on animals for the purpose of human entertainment.

Therefore, PETA advocates that it is the fundamental duty of citizens of India to have compassion for all living creatures and to protect wildlife.

Why are Tamilians protesting the ban on Jallikattu?

They consider it symbolic of Tamilian pride as it is an ancient tradition that has been carried on for years. Jallikattu witnesses thousands of participants, attempting to tame the bulls by latching to their horns or humps. Its innumerable references could be found in Dravidian Literature and the indigenous population of Tamilnadu has held this event for years. The Jallikattu protests are fuelled by the view that the ban impinges on the cultural identity of the populace.

What do the protestors want?

Promoted
Listen to the latest songs, only on JioSaavn.com
The protesters, mostly young students and professionals, say their fight is for their culture and Tamil pride and reject the allegation that Jallikattu is cruel to the bulls. They have also demanded that animal rights organisation PETA, which has lobbied against Jallikatu, be banished from the state.

The protesters say the law on cruelty to animals must be amended to include Jallikattu bulls on a list of trained animals used in the military or for educational and scientific purposes.