What India Hopes to Achieve at BRICS Summit 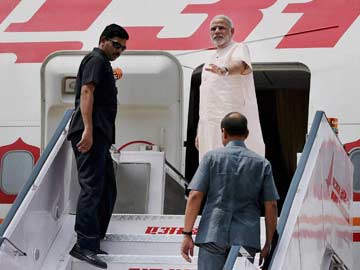 New Delhi: Prime Minister Narendra Modi is flying to Brazil, drawn not by the football world cup fever, but to face his first diplomatic test on a global stage - the sixth annual BRICS conference.

The BRICS summit - a multilateral forum of the emerging economies of Brazil, Russia, India, China and South Africa - will be the first occasion that the Prime Minister will be sharing stage with world leaders after he assumed office in May.

The summit will last over two days and will be held in the cities of Fortaleza and Brasilia in Brazil, just after the country finishes hosting the football world cup on Sunday.

So what does India hope to achieve?

Apart from bilateral meetings with various leaders, India hopes to achieve some major diplomatic coups by the end of the two-day summit.

BRICS BANK
At the top of the agenda is the setting up of a new development bank on the lines of the World Bank and Asian Development Bank. The idea was first discussed at the BRICS meet in New Delhi in 2012.

CONTINGENT FUNDS
With a corpus of $100 billion dollars the proposed bank will fund projects for infrastructure projects in emerging, developing countries and will rival the western dominated International Monetary Fund and World Bank.

BRICS BANK: DELHI OR SHANGHAI?
One of major points of contention has been the location of the headquarters for the proposed bank which both India and China are vying for. South Africa has also thrown its hat in the ring, hoping that the bank will be based in Johannesburg.

PM Modi will be attempting to bring the bank to New Delhi, but it remains a challenging prospect considering Shanghai, where China plans to locate the bank, already has the infrastructure required.

In a statement, released before the Prime Minister boarded the plane to Brazil, he said, "I look forward to the successful conclusion of major BRICS initiatives, like the New Development Bank and the Contingent Reserve Arrangement, which have seen significant progress since their launch in New Delhi in 2012".

INDIA-CHINA: SECURITY CONCERNS
The second priority on PM Modi's list is India's security concerns about its Northern and Eastern borders that it shares with China. PM Modi, who will have have bilateral meetings with all BRICS leaders, will meet Chinese President, Xi Jinping. The Chinese president is expected to visit India later this year.

Promoted
Listen to the latest songs, only on JioSaavn.com
The Prime Minister's focus will be trying to get an assurance from China to stop all incursions in the disputed areas till a permanent solution is found.

AFGHANISTAN: AN AREA OF MUTUAL INTEREST
Russia, China and India would also be discussing the security situation in Afghanistan as the date for the exit of American combat troops from the war-torn country nears. The threat has become more real even as Afghanistan has been going through a tumultuous and hotly contested election. China's 'all weather freind' status to Pakistan, which has a huge stake in Afghanistan, is a roadblock to any talks on the issue.

WEAK LINKS WITH LATIN AMERICA?
The relationship with Latin America, whose economic muscle and global clout, has been growing has an immense potential to grow. This will provide an excellent opportunity for the Prime Minister to make  new allies in the Southern Hemisphere.

The world's biggest emerging economies along with a host of South American countries will be at the two-day summit. This will be an opportunity for the Prime Minister to establish a rapport with the world leaders, with whom he will be working over the next five years.