The family of a man with disabilities, who died in police custody, was joined by locals and train passengers in the protest, which escalated into a clash with the police. Tyres were set on fire and trains grinded to a halt and protesters threw stones at the police 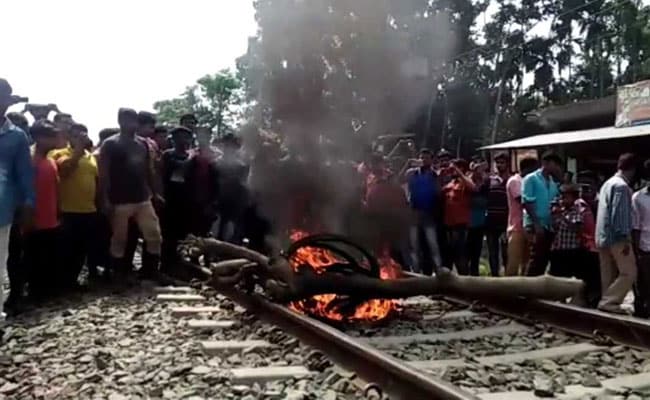 West Bengal: Tyres were set on fire and trains grinded to a halt in a protest that lasted over five hours

Chaos descended on the railway tracks near Kolkata in West Bengal as the family of a 27-year-old man with disabilities, who died in police custody, blocked rail lines demanding the arrest of those responsible. Gautam Mondal's family was joined by locals and train passengers in the protest. Tyres were set on fire and trains grinded to a halt.

The protest, near Lebutala railway station 40 km north of Kolkata, escalated into a clash with the police. Stones were thrown at the police. Lathi charge followed. After about five hours, the blockade was lifted.

It all began on May 3. Cyclone Fani had made landfall in neighbouring Odisha and was moving towards Bengal at a wind speed of 90 km/hour. Train services were out.

Some passengers, angry at not being given prior notice, blocked trains at Barasat, 23 km north of Kolkata, and ransacked the station. Gautam Mondal was among the several people arrested.

The following day, Gautam was moved to Dum Dum Central Jail. According to sources, he was severely injured when he arrived at the prison.

The weekend passed and on Monday, Gautam's mother Arati visited him in jail. He told her he had been tortured by the police. He was not allowed close to her and he shouted that he had been beaten and starved, Arati said.

The next day police went to his home and told his family he was dead.

Gautam is survived by wife Saptami, who is four months pregnant. "When we heard rail police had detained him, we told police that Gautam had physical disabilities and there was no question of him being involved in any vandalism. Set him free. But police did not listen," said Saptami.

"My disabled son was starved, beaten and killed by police. I want the strongest punishment for those responsible for his death," Arati said.

Locals want a probe into how Gautam died in police custody and warned of further protests with his body. Central jail superintendent Debashish Chakraborty has reportedly said a judicial and administrative probe into Gautam's death has been sought.

Gautam's family claims that he was alive and well at the time of arrest. This has been disputed by jail authorities, who reportedly said that Gautam already had injuries on his body. "He had a disability in one leg and had been injured there too. He was given medical treatment in jail but on Tuesday morning his conditioned worsened and he was sent to the hospital", they said.

The family has not received his body as post mortem was pending.