However Dr Uttam Kumar Thakur, President of the Association of Resident Doctors at the PGIMER, said all emergency services functioned normally and the on-duty doctors did not join the protest. 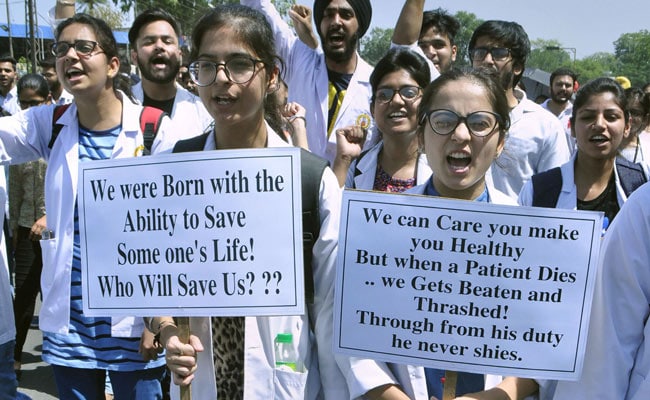 Doctor Strike: Doctors in Patiala protest to show solidarity with their counterparts in West Bengal (PTI)

Over 1,200 resident doctors at Chandigarh's Postgraduate Institute of Medical Education and Research (PGIMER) held a demonstration to express solidarity with their protesting counterparts in Kolkata.

The functioning of the OPDs was partially hit due to the protest.

However Dr Uttam Kumar Thakur, president of the Association of Resident Doctors at the PGIMER, said all emergency services functioned normally and the on-duty doctors did not join the protest.

The protest lasted for five hours from 8 am to 1 pm and the doctors returned to work after it, he said.

Doctors in West Bengal are protesting since Tuesday against an attack on two of their colleagues by a mob following the death of a patient at the NRS Medical College and Hospital in Kolkata.

Resident doctors at government hospitals in Punjab and Haryana too wore black ribbons during the working hours to protest the Kolkata incident.

A demonstration was held at the Government Rajindra Hospital in Patiala.

Similar protests were reported from Bathinda in Punjab besides Faridabad, Sirsa and some other places in Haryana.

"We are with all the doctors who have struck work. We also demand strict action against the goons responsible for the attack," Dr Uttam Kumar Thakur said.

He said incidents of violence against on-duty doctors were "increasing day by day".

"Though laws are there to protect doctors from such attacks, these remain toothless in the absence of effective implementation. We want the centre and state governments to ensure that these laws are effectively implemented," he told reporters.

Expressing solidarity with the doctors in West Bengal, Dr Thakur said around 1,200 resident doctors at the PGIMER, along with 700 others, including paramedics and the nursing staff, condemned the Kolkata incident.

Hitting out at the Mamata Banerjee-led West Bengal government, Dr Thakur in an earlier statement said, "The role of the state government is absolutely disgusting."

"It is sheer inefficiency and callousness on the part of the government that they are incapable of giving the minimum protection to their on-duty doctors and solve this problem. We expect from the state government to hear the doctors rather than being stubborn in this situation," he said.