The clashes broke out while Durga Puja revellers were taking the goddess' idol for immersion through a locality predominantly occupied by a minority community on October 21. 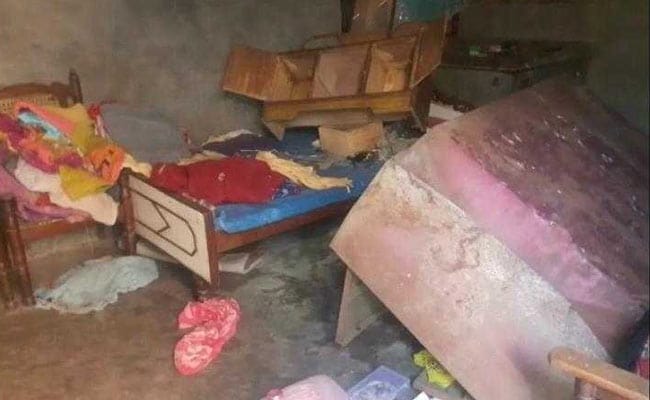 A house that was ransacked in the violence at Bahraich's Khaira Bazar village.

Residents of Khaira Bazar village in Uttar Pradesh's Bahraich district continue to live under the threat of communal violence, weeks after clashes erupted between two communities during the Durga Puja festivities last month. According to news agency ANI, several families have already fled for fear of being attacked or arrested.

The clashes reportedly broke out while Durga Puja revellers were taking the goddess' idol for immersion through a locality predominantly occupied by a minority community on October 21. Shops were ransacked and houses set on fire as armed groups fought pitched battles on the streets. "Things are still very tense here. We don't know what to do," ANI quoted a woman as saying on the condition of anonymity.

Police, however, maintain that people can now return to their homes because the situation has been brought under control. "We arrested 50 people from both the communities on the basis of video clips of the violence. We are investigating the case thoroughly," ANI quoted Assistant Superintendent of Police Ravindra Singh as saying.

The police, however, have been criticized for allegedly enacting the Unlawful Activities (Prevention) Act against members of a certain community. An Indian Express report quoted a police officer as stating that the anti-terror law was wrongly invoked in this case. "We are probing how this happened. The accused are now being charged under the Criminal Law Amendment Act," he said.

This is the second incident of communal violence to have occurred in Bahraich district over the course of two months this year. Clashes had erupted during the Ganesh Chaturthi festivities in September, when two groups faced off over the erection of a pandal. Around six people were injured then.