India is celebrating 75 years of Independence this year under the mammoth "Azadi ka Amrit Mahotsav" initiative. 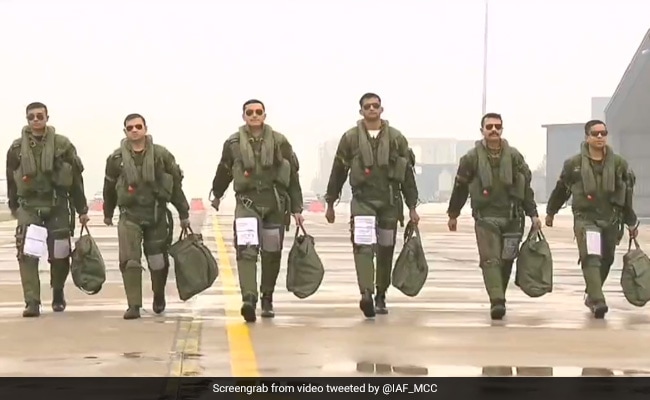 The Indian Air Force today released a series of behind-the-scenes videos of pilots preparing for the grandiose 75-jet flypast over Rajpath in the national capital on Republic Day tomorrow. The day marks the anniversary of India officially adopting the Constitution on this day in 1950.

India is celebrating 75 years of Independence this year under the mammoth "Azadi ka Amrit Mahotsav" initiative that will "commemorate 75 years of progressive India and the glorious history of its people, culture and achievements" through the year. The Republic Day parade will show off the country's military might and cultural diversity.

The BTS videos, set to upbeat instrumentals, show fighter pilots preparing before gearing up to board their Rafales.

A day to go, #IAF Air Warriors prepare for the grand 75 aircraft flypast over #Rajpath.

A behind the scenes look at the crew of #Rafale, #Su30MkI and #Mi17IV. pic.twitter.com/Pukddar49w

"Golden Arrows, I am proud to be a part of the grandest-ever Republic Day flypast. I will be leading the Vinaash Formation in which for the first time five Rafales will be flying in the arrowhead formation over the Rajpath," one of the pilots said with the Rafale behind him.

The montage video then cuts to the runway as the roaring Rafale takes off, piercing through the clouds and rising above.

The second video with the Flying Lances opens with seven Sukhoi pilots going through their flight plans and manoeuvres.

"This year for the Republic Day flypast we will be strapping on these wings and etching the Trishul (formation) - a divine symbol of a weapon of the God - over the national capital," a pilot says.

The third video shows the Air Force's "Nubra Warriors" unit as they get ready to be airborne in their Mi17IV aircraft.

"My heart swells with pride to be a part of the Republic Day celebrations. This aircraft has proven its mettle in securing the skies of our country," a pilot says.

A grand fly-past of 75 aircraft of the Indian Air Force, cultural performances by 480 dancers selected through a competitive process, display of 10 scrolls each of 75 metres length and installation of 10 large LED screens for the first time will mark the Republic Day parade tomorrow, the Ministry of Defence said.

"The grand finale and the most keenly awaited segment of the parade. The fly-past, will for the first time witness 75 aircraft of the IAF displaying a number of formations, as part of 'Azadi ka Amrit Mahotsav'," it said.

For the first time, the IAF has coordinated with Doordarshan to show cockpit videos during the flypast, it noted.

Ten scrolls - each 75 metres long and 15 feet high - will be displayed along the Rajpath during the parade for the first time, it mentioned. "They (scrolls) were prepared during the 'Kala Kumbh' event jointly organised by Ministries of Defence and Culture."

"Curated films combining footages of previous Republic Day parades, short films on the armed forces and stories related to various events in the run-up to the event will be screened before the parade," it noted. Thereafter, the screens will show the live event.