Many social media users expressed amazement over the capacity of elephants to comprehend complex emotions such as grief. 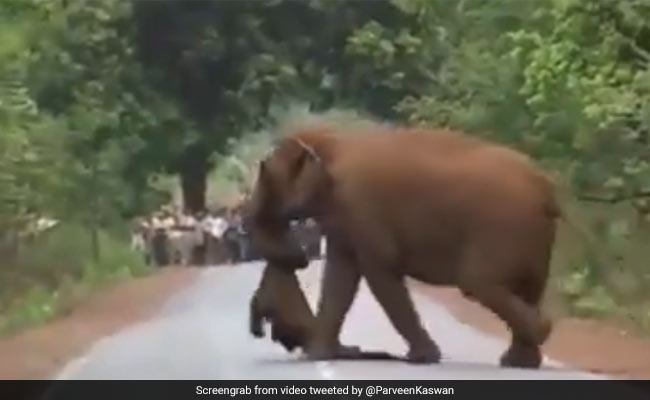 The video showed an elephant emerging from the woods with the carcass of a dead calf.

Much has been said about their fabled memory, but it took video footage of a "funeral procession" taken out by a herd of elephants to make netizens realise that humans are not the only creatures capable of displaying complex emotions such as grief and longing.

A video clip posted by Indian Forest Service officer Parveen Kaswan on Twitter a few days ago shows an elephant emerging from a wooded area onto a road, carrying the body of a dead calf. Unmindful of a group of people watching the events unfold from a distance, it drops the carcass to the ground before proceeding to stand at a respectable distance. Another elephant, smaller in size, comes up from behind and takes up its position a couple of feet in front. That is when the rest of the herd emerge -- bulls, cows and calves -- and cluster around the body with their massive ears solemnly fanning the wind. After spending what seems like a minute in silent prayer, the first elephant picks up the carcass again and leads the herd back into the forest.

This will move you !! Funeral procession of the weeping elephants carrying dead body of the child elephant. The family just don't want to leave the baby. pic.twitter.com/KO4s4wCpl0

"This will move you!! Funeral procession of weeping elephants carrying the dead body of a child elephant. The family just doesn't want to leave the baby," the caption of the video read.

In a separate tweet, Parveen Kaswan touched upon theories of "ancient elephant cemeteries" in the forest. "Many people have written about it. But I have not found any conclusive evidence. Though in most cases, elephants prefer to die near water bodies," he said.

There are theories which talk about ancient elephant cemeteries in forest. Many people have written about it, including strecy. But I have not found any conclusive evidence. Though in most cases elephants prefer to die near water bodies. https://t.co/C2BoTsF6Q1

While the exact location of the funeral procession was not immediately known, the video generated a lot of interest on the Internet. "This is heartrending. There is a lot that humans can learn from animals," one of them said. Another cited the video to say that such footage is important to remind people how "truly remarkable" the animal kingdom is.

Elephant herds are led by a female, termed as a "matriarch" by experts.

According to the Smithsonian Magazine, there have been several instances of animals of various kinds grieving for their dead. Last year, a grieving orca whale made headlines by carrying the corpose of her dead calf for over two weeks on "a tour of grief" before finally giving it up to the depths of the Pacific Ocean. In another case, a group of captive chimpanzees held a simian version of a wake after an elderly member died, checking her body for signs of life and cleaning bits of straw from her fur. For many days afterwards, they refused to pass by the spot where she died.