"Want To Be Leader? Grab Officers By The Collar": Chhattisgarh Minister

Kawasi Lakhma, who is also a five-time Congress MLA, made headlines ahead of national elections earlier this year when he was caught on video threatening voters in Kanker district with "electric shock" if they voted for an opposition candidate 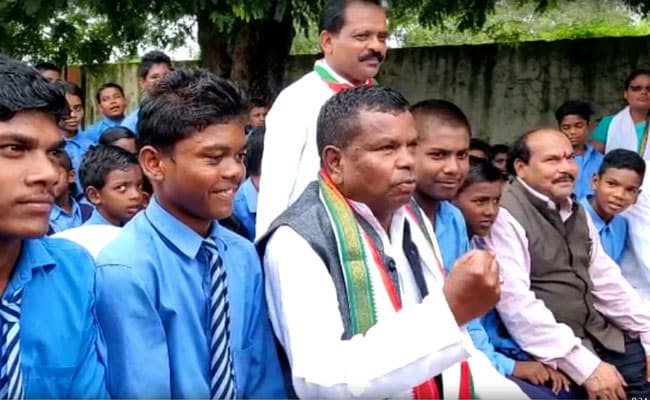 Kawasi Lakhma, a Chhattisgarh minister, has offered up a shocking lesson in politics to school students, telling young children they should "grab the collars of the Collector and SP" if they want to become politicians. Mr Lakhma, who is the excise and industries minister, made the bizarre remark during a Teacher's Day event at a school in the state's Sukma district. A video of the minister's interaction surfaced online today, showing him sitting outdoors flanked by young boys in school uniform - a blue shirt and striped tie.

In the video Mr Lakhma, 66, can be heard recounting an episode from his past, when another student asked for tips to become a successful politician. After a brief pause, during which he looks around him, he replies: "Bada neta banna hain to Collector, SP ka collar pakdo (If you want to become a big politician, grab the collars of the Collector and the Superintendent of Police)".

As he makes his remark, Mr Lakha raises a clenched fist in the air and grimaces, after which he smiles while the students and others gathered around him laugh.

Mr Lakhma, who is also a five-time Congress MLA, made headlines earlier this year while campaigning for the national election - he was caught on video threatening voters in the state's Kanker district with an "electric shock" if they voted for an opposition candidate.

Kawasi Lakhma was one of the survivors of a Naxal attack in 2013 that killed almost the entire top brass of the Chhattisgarh Congress. He was suspected of involvement in the attack and was questioned in connection with the matter, but was later cleared by a NIA probe for lack of evidence.