A 25-member delegation of village heads and panchayat members from Jammu and Kashmir, including 13 from the Valley, held a one-and-a-half hour meeting with Union Home Minister Amit Shah in Delhi on September 3. 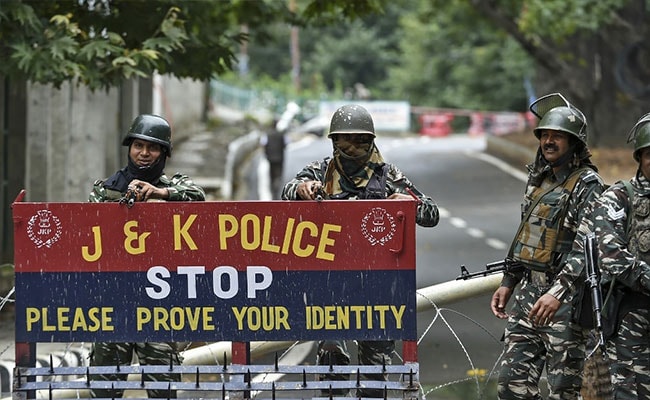 Panchayat elections in the state were held last year after a gap of six years.

All Jammu and Kashmir Panchayat Conference (AJKPC) state president Anil Sharma today said thousands of panchayat members and village heads would play their role in restoring peace and normalcy in the Valley.

He said a 25-member delegation of village heads and panchayat members from Jammu and Kashmir, including 13 from the Valley, held a one-and-a-half hour meeting with Union Home Minister Amit Shah in Delhi on September 3 and returned satisfied over the fulfilment of their various long-pending demands.

"Thousands of sarpanches and panches have no fear (of terrorists) and will play their role in restoration of peace and normalcy in Jammu and Kashmir," Mr Sharma said.

The Union home minister has assured them that every 'panch' and 'sarpanch' in Jammu and Kashmir vulnerable to threats from terrorists will get police security and insurance coverage of Rs 2 lakh each.

Amit Shah promised to begin recruitment for various government jobs at the earliest and said the government would ensure merit-based recruitment of at least five aspirants from each village.

He also told the delegation that the demand for increasing the honorarium of those holding the post of 'sarpanch' and 'panch' will be considered.

Panchayat elections in the state were held last year after a gap of six years. More than 35,096 village heads and panchayat members were elected to 4,490 panchayats.

"Our delegation had a detailed discussion with the home minister over Panchayati Raj Institutions and the prevailing situation (in Jammu and Kashmir) following of the abrogation of provisions of Article 370... We are satisfied with the outcome of our meeting," Mr Sharma said.

He said the main demands of the delegation included an employment package, security and insurance cover for 'panch' and 'sarpanch' facing threat to their lives and adequate funds at the disposal of each panchayat on par with MP or MLA local area development fund.

"Amit Shah assured us that Rs 3,000 crore would be made available to panchayats across Jammu and Kashmir. Besides, four to five jobs will be given to each village in next couple of months besides accepting the demand for security and insurance coverage of the panches and sarpanches," Mr Sharma said.

The AJKPC president said they were fighting for implementation of the 73rd and 74th Constitutional amendments in toto to fully empower the panchayati raj institutions and "we are glad that the home minister assured us that all the provisions will come into effect in Jammu and Kashmir from November 1."

The state of Jammu and Kashmir will be bifurcated into two Union territories -- Jammu and Kashmir, and Ladakh which will come into existence on October 31. President Ram Nath Kovind has given his assent to a legislation in this matter.

Mr Sharma said the delegation also raised the demand for clearance of Rs 700 crore liability of MGNREGA, construction of new panchayat buildings at places where there is no such facility and deployment of security guards and gardners at each panchayat.

He said all such measures are necessary to politically empower and strengthened the grass-root level institutions in Jammu and Kashmir.