The person who recorded the video also shows the signboards inside the government office. 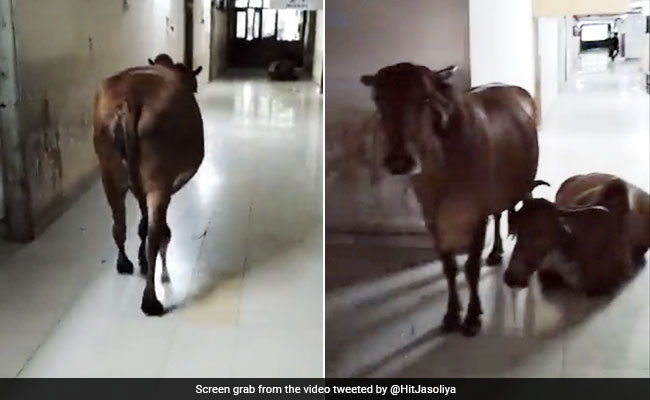 A stray cow inside the government office in Gujarat's Bhavnagar.

In poll-bound Gujarat, government buildings are turning into favourite hangout places for stray cattle. Video that surfaced on social media earlier this month showed a cow inside the building that houses several government offices. According to users who commented on the video identified the building as Bahumali Bhavan, and said it is visited by hundreds of people every day. Last week, the Gujarat Assembly withdrew a bill aimed at prohibiting the movement of stray cattle on roads and public places in the wake of a protest launched by cattle rearers.

In the video, the cow is seen strolling around in the long passage of the building and meets another who is sitting outside the office of the surveyor.

The person who recorded the video also shows the signboards inside the government office.

Social media users posted humorous comments after watching the video. "Well they will be working there so I guess they are checking what they have been made to sign up for," one user tweeted. "It seems doctor doing rounds," said another.

Indian Express said in a report that trusts running cow shelters are angry with the state government for not releasing funds and are setting the cows free.

The outlet further said that over 1,700 cowsheds run by trusts have joined the agitation. But the civic bodies across the state are working to impound these animals from the roads after Gujarat high court's indictment of the Gujarat government to rein in the stray cattle menace.

The state government had cleared the 'Gujarat Cattle Control (Keeping and Moving) In Urban Areas Bill' in April this year arguing that the practice of keeping cattle in urban areas is causing trouble for people living in cities as the cattle-rearers let their animals stray on roads and other public places.

The bill mandated that after getting a licence for their cattle, the owner is required to get the cattle tagged and refrain from letting the cattle move on roads or any other places in the city. It had the provision of one-year jail term or a penalty of Rs 10,000 or both for violators.

The opposition Congress gad termed it a "black act" and the Maldhari community launched protests against it.