In a video that went viral on social media, a self-styled godman can be heard saying he had called out the names of a few people and the one name that he had missed would lead them to the murder suspect 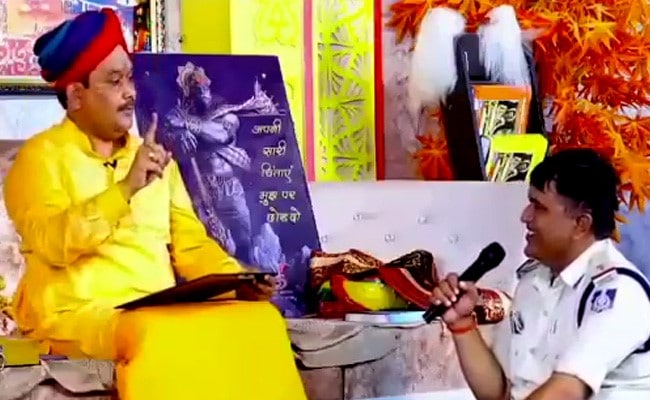 In an attempt to identify the suspect in the murder of a 17-year-old girl, assistant sub-inspector Anil Sharma from Bamitha Police Station in Chhatarpur, Madhya Pradesh, reportedly reached out to self-styled 'Baba' Pandokhar Sarkar for assistance. The policeman was suspended and the officer-in-charge of Bamitha Police Station was line-attached.

In a video that went viral on social media, Pandokhar Sarkar can be heard saying that he had called out the names of a few people and the one name that he had missed would lead them to the murder suspect. He also said that the prime suspect was from the Majhguwan region and reaching him would be crucial in getting to the bottom of the case.

Earlier, the body of the 17-year-old girl was recovered from a well in Otapurva village on July 28. The girl's relatives had accused three of their villagers -- Ravi Ahirwar, Gudda alias Rakesh Ahirwar, Aman Ahirwar -- of murdering the girl.

In a bid to identify the suspect in the death of a 17-year-old girl,ASI Anil Sharma from Chhatarpur reached out to Pandokhar Sarkar, he could be heard saying he has called out the names of a few people the name he missed will lead them to the suspect @ndtv@ndtvindiapic.twitter.com/u2RrpaLuYG

Following a complaint from the girl's family, police registered a case under Section 302 of Indian Penal Code had detained the three persons from Otapurva village, but let them go later on due to lack of evidence.

A few days later, police suddenly arrested the uncle of the minor girl, Tirath Ahirwar, saying that he had suspected that his niece was having an illicit affair with someone. He doubted her character and strangled her to death and later dumped the body in the well. The family members of the murdered girl were surprised by this arrest and the way the investigation was being handled. Meanwhile, the video of the 'Baba' went viral on social media.

A team has been constituted to probe the murder. Manmohan Singh Baghel, the Sub Divisional Police Officer, has been given the responsibility to conduct further investigations.