Vice President M Venkaiah Naidu is being accompanied by a high-level delegation for the six-day visit, the Ministry of External Affairs said Tuesday. 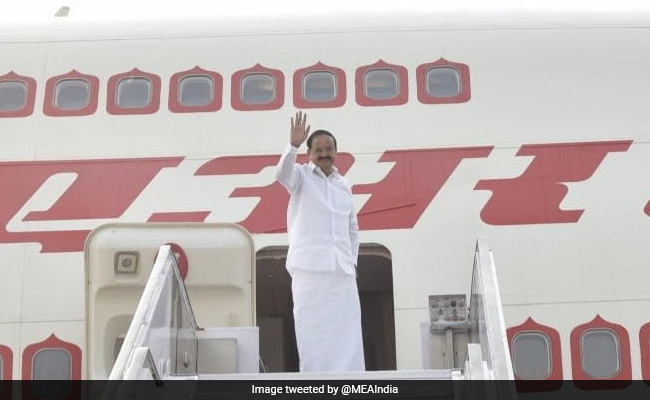 Vice President M Venkaiah Naidu on Wednesday embarked on a three-nation visit to Botswana, Zimbabwe and Malawi, during which he will hold talks with the top leaders of these African countries, meet business groups and interact with the Indian community.

Mr Naidu is being accompanied by a high-level delegation for the six-day visit, the Ministry of External Affairs said Tuesday.

The delegation includes Union Minister of State for Social Justice and Empowerment Krishan Pal Gurjar, two MPs and senior officers of the Union government, it said.

Mr Naidu's official engagements includes meeting presidents of the countries; holding bilateral meetings with his counterparts and delegation level talks; and interacting with business groups and Indian communities, the ministry said in a release.

In Botswana, the vice president will inaugurate the Global Expo Botswana 2018 together with his counterpart in that country. The expo will see participation of 25 big Indian companies and business houses covering a range of sectors, it said.

In Zimbabwe, Mr Naidu will meet the nation's foreign minister and lay the foundation stone of the Chancery project. He will witness signing of MoUs on mining, information and communication technology, and culture, the ministry said.

The vice president, in Malawi, is expected to inaugurate the Business Incubation Centre and India-Africa Institute of Agriculture and Rural Development and unveil a bust of Mahatma Gandhi, it said.

Several MoUs and agreements, including an extradition treaty, and pacts on agriculture and training will be signed during the visit, the External Affairs Ministry said.

From India, there have been 26 outgoing visits to Africa at the level of president, vice president and prime minister in the last four years, it said.