Swami Yatishwaranand, a Minister of State in Uttarakhand's BJP government, is not the only one in the photo without a mask. Four others in the meeting are maskless, including two more ministers. 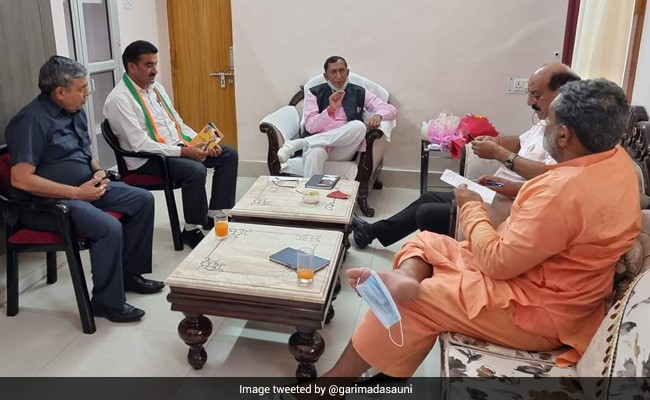 At a time when experts are urging strict precautions amid warnings of a third wave of Covid, an Uttarakhand minister has been caught sitting in a meeting with a mask hanging off his toe. The photo has gone viral and has been slammed as a show of egregious callousness by the minister, Swami Yatishwaranand.

Yatishwaranand, a Minister of State in Uttarakhand's BJP government, is not the only one in the photo without a mask. Four others in the meeting are maskless, including two more ministers, Bishan Singh Chuphal and Subodh Uniyal.

"This is the seriousness of the ruling party's ministers. And then they punish poor people for not wearing masks," tweeted Congress spokesperson Garima Dasauni.

She questioned what message the minister was giving to the masses when lakhs had suffered or lost their lives in the second surge of Covid in April-May.

Another Congress leader, Pankaj Punia, mocked the minister saying: "Here is the right way to use a mask."

A leader of the Aam Aadmi Party (AAP), Deep Prakash Pant, wrote a similar post: "Learn from this cabinet minister in Uttarakhand what the right place is for a mask."

The Uttarakhand government has been criticised for its perceived soft handling of a massive Covid surge that swept through the country two months ago.

Earlier this week, the state cancelled the Kanwar pilgrimage on account of Covid. The annual ritual sees thousands walk or ride to the river Ganga at Haridwar to collect water and bring it back to Shiva temples in their area.