"Shine The Light...": Race To Save People Trapped In Uttarakhand Tunnel

Uttarakhand Glacier, Tapovan Tunnel: Between 25 and 35 people are believed to be stuck inside the tunnel

Late Tuesday night - nearly 60 hours after a glacier burst in Uttarakhand's Chamoli unleashed an avalanche that trapped between 25 and 35 people inside the 2.5 km-long Tapovan tunnel - rescue teams that began work Sunday finally managed to clear some of the debris and, with great caution, enter the structure.

Inside, all is dark and the meagre light from torches and the miner's lamps show boulders and large chunks of concrete embedded in the mud and slush that seems to have filled most of the tunnel, which is U-shaped and measures 12 by 15 feet.

The tunnel has one entry and bifurcates, making it harder to locate the missing men.

"The height of the accumulated slush has reduced... ITBP personnel are waiting to enter as soon as possible," he added.

The challenge, though, is clearing the slush quickly (and safely).

"... accumulation of a large amount of debris and sludge... we pull it out via buckets but the sludge keeps coming back. Progress is slow but we are trying to speed it up," SDRF personnel told ANI. 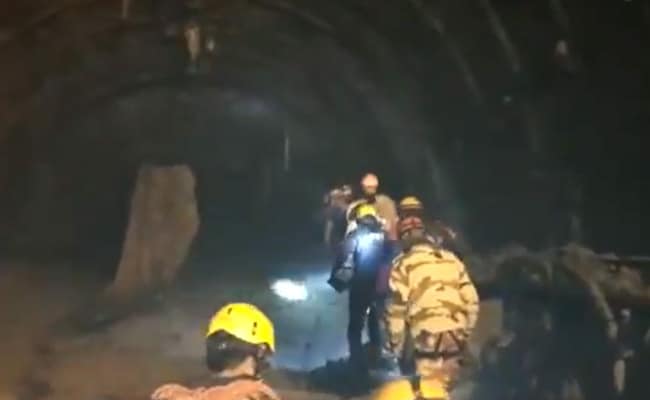 Uttarakhand Glacier: Tapovan tunnel is U-shaped and about 2.5km

The walls of the tunnel are cracked and there is the sound of falling water in the background, as the emergency teams shout out warnings and notes to each other.

"Nobody else will enter... nobody. Go back, it is not safe," one man can be heard.

"Shine the light there, shine it there," another says, while a third shouts, "On the wall, the wall."

#WATCH: A joint team of ITBP, NDRF, SDRF & other sister agencies entered into the tunnel (being cleared off debris). Drone camera used to see the feasibility to enter beyond the cleared site inside the tunnel. Machines back on the job of clearing the slush: ITBP

As the video plays out the rescuers discuss how best to proceed. One warns about unstable mud pockets on the floor, another warns of falling rocks and water hazards.

"Everybody quiet.. quiet please. Shut up," another voice shouts out, as senior members take stock.

Eventually, after a recce of the parts of the tunnel they have managed to clear, the men walk back.

Tuesday afternoon it was estimated that only 80 of the 180 metres that needed to be cleared at the tunnel's entrance had been cleared.

Now, it appears around 60 metres are still left. A senior ITPB official said the rescuers had not been able to make contact with the trapped men but are hopeful for "signs of life".

The clock may be ticking, but the rescuers are not giving up hope. 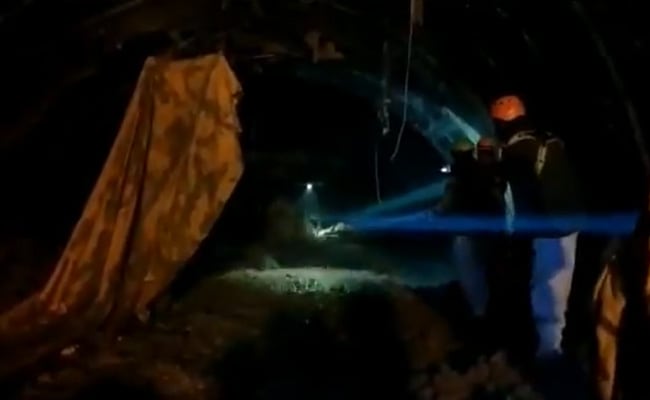 Uttarakhand Glacier: Inside the tunnel it is dark and treacherous

"We hope to save the people stuck inside," emergency workers, who have already saved 12 men from another, smaller, tunnel, said.

Outside, meanwhile, other teams are on standby with extra lights and earth-moving equipment. Medical teams are ready with oxygen cylinders and stretchers to help to those brought out.

Also outside are family members and friends of those trapped in the tunnel, and they are anxious for news and desperate to see their loved ones again.

Thirty-two deaths have been reported so far, but with more than 170 people still missing, the toll is likely to increase.