Watch: BJP Lawmakers Thrash Each Other With Shoes In Fight For Credit

The fight broke out after a fuming BJP MP Sharad Tripathi asked why his name was not included on the foundation stone for a local road.

Hurling the foulest of unprintable abuses, two BJP lawmakers from Uttar Pradesh fought each other with fists and shoes at an official meeting on Wednesday in an example of elected representatives behaving in a manner most unbecoming of their office.

The incident took place in Uttar Pradesh's Sant Kabir Nagar, about 200 km from capital Lucknow, in full public view and in the presence of journalists. The meeting was a District Coordination Meeting, where top public officials convene to review development projects and other work in the area.

The fight broke out after a fuming BJP Member of Parliament Sharad Tripathi, who represents the district, asked why his name was not included on the foundation stone for a local road. Rakesh Baghel, one of the MLAs from the district, said it was his decision.

The argument then quickly devolved into obscenities with Mr Baghel daring his opponent to ask the questions "to his shoe". 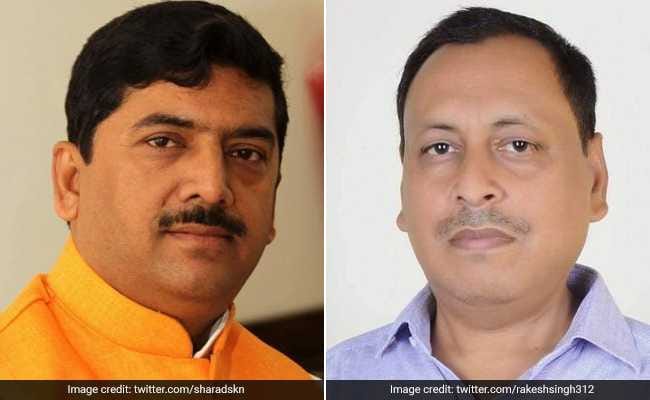 What followed was absolute mayhem with Mr Tripathi bashing the other with his shoe and Mr Baghel responding in kind as well.

Finally, police officers attending the meeting had to intervene to end the fight. Till the very end of the video, the two lawmakers can be heard abusing each other.

The BJP is yet to say what action it will take against the leaders. "We have taken cognizance of this condemnable incident and both have been summoned to Lucknow. Strict disciplinary action will be taken," UP BJP president MN Pandey told news agency ANI.

Speaking to news agency ANI, Mr Tripathi said, "I regret the incident and feel bad about it, what happened was against my normal behaviour.  It's a reaction due to action and I did it in self-defence. If I am summoned by state chief then will put my point across."

Opposition leaders attacked the BJP over the disgraceful incident.

"Today in Uttar Pradesh, a parliamentarian and a legislator of the party - that claims to the world's most disciplined - respectfully exchanged blows with their shoes. This is the frustration of the BJP that is expecting a defeat in the upcoming elections.The truth is that the BJP is not being able to find candidates for the polls," Akhilesh Yadav said in a sarcastic tweet.

Rakesh Singh Baghel, 52, is the Vidhan Sabha Member from Menhdawal and is associated with the "Hindu Yuva Vahini", the right-wing group founded by Chief Minister Yogi Adityanath, infamous for incidents of moral policing and attacks on minorities.