After his arrest, Ritik Malik told Ghaziabad police that he had made a mistake and now wanted to lead a normal life 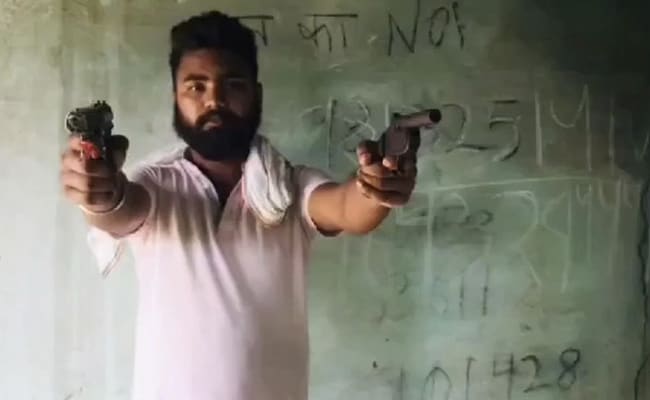 The man was seen posing with guns in the video

A young man has been arrested for shooting an amateur video of himself brandishing guns and declaring that he wanted to become the “don” of western Uttar Pradesh (UP), and circulating it on social media, the police said on Monday. The man has been identified as Ritik Malik, a resident of Loni area in Ghaziabad. In the video, Mr Malik unapologetically declares that his ambition is to become the most notorious criminal of the region to make a name for himself. He even added a background score to give the video a Bollywood-style spin.

However, when the police found out about the video, which showed a few photographs of Malik holding guns and posing at different locations alone, he was arrested.

Quoting a hit song from 1994 film “Vijaypath”, Ghaziabad SP (Rural) Iraj Raja said one more “great man” has landed in jail because of his love for guns. The SP added that it was a big deal the man accepted his mistake, and, in an apparent sarcasm, he also wished Malik for his future in jail.

He also tweeted a before-and-after photograph of Malik.

In the first part of the image, in which Malik is holding guns, the text reads, “Earlier, I wanted to become the “don” of west UP”. In the second, he is sitting on his haunches with folded hands and appears miserable. The text reads, “I do not want to become a don. I want to live a normal life. It was a mistake.”

Several people reacted to the SP's post, mostly laughing at Malik and praising the UP police. One user thanked the police for bringing one more person on the right path.

Another person said what the police did was commendable, but added that though Malik has accepted his mistake, people like him usually don't mend their ways.

A third user thanked Ghaziabad police for sending Malik to the “right place (behind bars)”.

Another user tweeted that after making a mistake, a person should be given a chance to rectify. However, if that person repeats the same mistake again, then action should be taken.

Here are a couple of other reactions:

Do you think this was apt punishment for the man? Tell us in the comments below.