Samajwadi Party leader Akhilesh Yadav alleged BJP is not focusing on the right direction, as India is very behind in the Hunger Index and the most malnourished children in the country are in Uttar Pradesh. 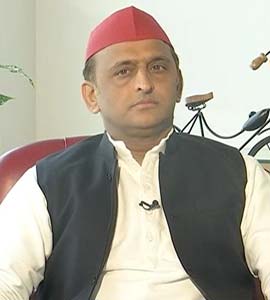 Former Uttar Pradesh Chief Minister and Samajwadi Party leader Akhilesh Yadav on Sunday alleged that Bhartiya Janata Party (BJP) is working in the wrong direction as India is behind Pakistan, Bangladesh, Nepal in Hunger Index and the most malnourished children are in Uttar Pradesh.

Speaking about the upcoming 2022 state assembly elections, Mr Yadav said, "It has been heard that BJP is going to cut tickets of its 150 MLAs. 100 MLAs have been protesting in the state Assembly against Chief Minister Yogi Adityanath. We already have 50 MLAs. So the calculation is simple, we have crossed 300 seats."

India, with a score of 27.5, has slipped from the 94th to 101st position out of 116 countries in the 2021 Global Hunger Index (GHI). India is now behind its neighbours Pakistan, Bangladesh and Nepal, stated the GHI report released on Thursday.