The BSF has neutralised 16 drones so far this year, compared to just one in 2021.

Most drones flown across the border are made in China, the BSF says.

Make-in-India technology is helping the Border Security Force (BSF) shoot down drones carrying deadly weapons, ammunition and drugs from Pakistan with greater success, the chief of the force told NDTV on Wednesday, revealing how it has neutralised 16 drones so far this year, compared to just one in 2021.

"Drones are a big challenge. Although we have installed an anti-drone set up along the border, we don't have such a setup which covers the entire western sector. We are in talks with many Indian companies. In the coming days, we may deploy this new technology in many more sensitive areas," BSF Director General Pankaj Singh said.

The force has also developed drones which can drop tear gas shells with precision. "In Tekanpur, our tear-gas unit has developed these types of drones which can carry as many as five shells too, and they can drop these shells on precise locations. But as of now, this technology only has been developed and not distributed," he said.

According to the BSF, most drones flown across the border are made in China and are available in the open market easily.

"Most of them are fabricated, but as drones have inbuilt chips in them, we have been able to retrieve data. In some cases, it gives us their exact flight path," said Mr Singh. 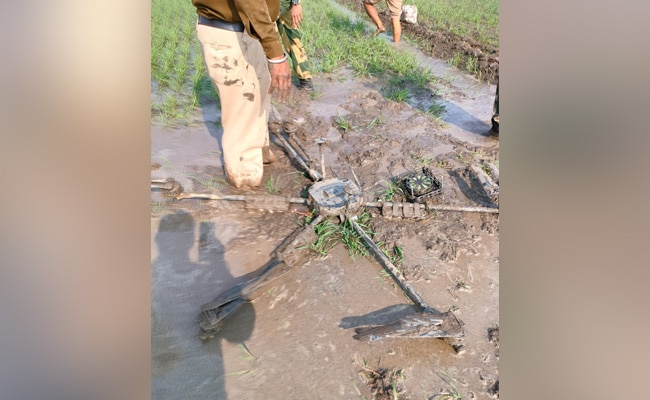 The BSF has also been able to decode the complete flight paths of some these drones.

According to him, the BSF is increasingly opting for indigenous solutions as foreign technology which was being used for surveillance was too expensive.

"The force insisted on developing its own system. With the help of our team, we developed low-cost technology solutions," he said.

The work on the Comprehensive Integrated Border Management System (CIBMS) - a plan to dramatically augment India's border security - is on track as well.

"The Home Ministry has sanctioned Rs 30 crore for this, and we are going to install as many as 5,500 cameras along our borders," Mr Singh said.