US "Open" To Trade Dialogue, Says Mike Pompeo Ahead Of India Visit

During his visit to India, Mike Pompeo is to meet Prime Minister Modi and his Indian counterpart S Jaishankar, and will likely discuss trade, in addition to strategic issues. 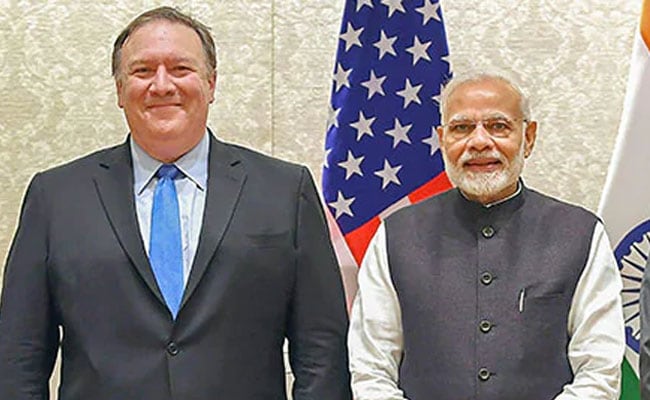 During his visit to India this month, Mike Pompeo will meet PM Modi and Foreign Minister S Jaishankar

US Secretary of State Mike Pompeo has pushed for India to further open its economy and also "diversify" its energy portfolio, saying countries that have provided American companies access to their markets have seen "real opportunity".

Speaking at the India Ideas Summit of US-India Business Council in Washington on Wednesday, ahead of his visit to New Delhi later this month, he also said America is "open" to dialogue on trade issues. He added that countries which have allowed US firms to have a "fair and reciprocal trade", have seen America open up to them. "And I think they've seen real opportunity."

The top American diplomat's remarks have come amid trade-related frictions between the United States and several other countries, including Mexico, India and China.

US President Donald Trump has been pursuing his trade policies aggressively and imposed tariffs on China, hitting billions of dollars of import of Chinese products.

The US media on Friday reported that India could be his next target.

On Monday in a TV interview, Donald Trump criticised India's import tariff on Harley Davidson motorcycles as "unacceptable", though he acknowledged that his "good friend" Prime Minister Narendra Modi has slashed the duty by half.

Earlier this month, President Trump announced his decision to terminated India's designation as a beneficiary under the Generalised System of Preference trade programme, which allows duty-free entry for products in to the United States, from June 5.

During his visit to India, Mike Pompeo is to meet Prime Minister Modi and his Indian counterpart S Jaishankar, and will likely discuss trade, in addition to strategic issues.

"We remain open to dialogue, and hope that our friends in India will drop their trade barriers and trust in the competitiveness" of their companies and businesses, he said at his major policy speech at USIBC.

"We'll also push for free flow of data across borders, not just to help American companies, but to protect data and secure consumers' privacy," he said. "And speaking of privacy, we are eager to help India establish secure communications networks - including 5G," he added.

The two countries have to make sure they have economic openness, he said, adding that the Trump Administration is trying to take down financial barriers and and create open markets.

"It needs to be a place where our partnership is one of true equals, not of domination. Based on my conversations in New Delhi last year, and in subsequent phone calls and meetings, I believe this is a deeply shared vision," Mr Pompeo said, referring to his previous visit to India in September last year for the inaugural "2+2 dialogue".

Mr Pompeo said more than 500 American companies successfully operate in India and the US is a market of roughly 20 percent of India's exports in both goods and services.

"I think that makes India a perfect partner and a great place for us to figure out how to grow our economies and get win-win solutions for both nations," he said, adding India's free-market reforms unleashed innovation and entrepreneurship.

"That prosperity that began to be ushered back in 1991, has helped propel Indians to every corner of the Earth," he said.

The US secretary of state also talked about trade opportunities in the energy sector.

"We've been blessed with abundant affordable energy right here in the United States, and we're now out producing it at enormous levels, not just crude oil but natural gas as well," he said.

India, by purchasing oil and gas from the US, can have a fully diversified energy portfolio where they don't have to "rely on nations that aren't as reliable as" the United States, he said, apparently referring to Iran with which the US is engaged in a bitter standoff after Donald Trump abruptly withdrew from a landmark nuclear agreement in May last year.

"We want to complete the Westinghouse civil nuclear project, and deliver more American LNG and crude," he said, adding that these steps will reduce India's dependence on Iran and Venezuela.

Responding to a question from the audience after his address, Mike Pompeo revealed that as a businessman, before he ran for Congress, he had spent some time in Chennai and Bangalore trying to sell products to Hindustan Aeronautics Limited.

"I'll tell you what. It was tough. India was still opening up, it was still figuring its way through, but there was a real value proposition there, and we did well," he said.

"When I think about that, when I think about what businesses need when they go to invest in each other's countries, they need stability, they need a set of rules that they can understand, they need to make sure that the efforts that we put forward together from the United States have sufficient bipartisanship, that they won't be whipsawed, as we have elections here," he said.

Mr Pompeo will embark on a four-nation visit of the Indo-Pacific on June 24. Other than India, he will visit Sri Lanka, Japan, and South Korea, concluding his tour on June 30.

He will join Donald Trump in Japan for the G20 Summit.

Donald Trump and PM Modi are scheduled to meet on the sidelines of the summit in Osaka on June 28-29.