Defence Minister Nirmala Sitharaman was on a 5-day visit to the US, during which the two nations focused on their defence partnership and cooperation in the Indo-Pacific region. 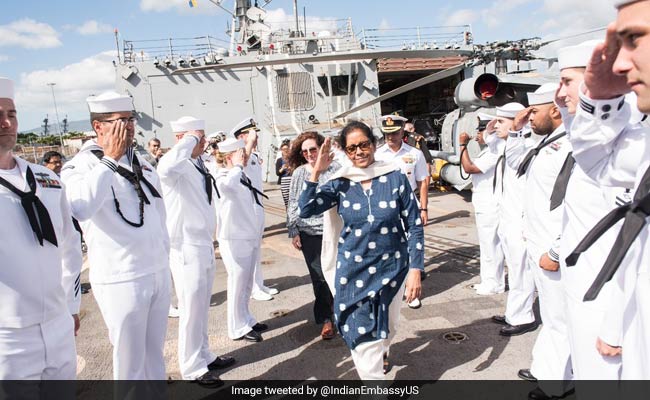 India and the United States agreed on "accelerating the momentum" of their defence ties during Defence Minister Nirmala Sitharaman's five-day visit to the US which ended today. According to officials privy to the high-level talks, the two largest democracies in the world focused on the Indo-Pacific region and agreed on enhancing India's naval capabilities in the Indian Ocean region. Prime Minister Modi's 'Make in India' programme was also discussed in detail, with an aim to increase participation by American companies.

The officials said that the "US is leaning way forward" to ensure India meets its needs and aspirations in the defence sector, adding that "The US is taking steps to ensure India achieves its strategic goals" in the Indo-Pacific.

However, no official announcement was made regarding the shifting of the production and manufacturing base of F-16 fighter jets to India. Officials did not comment about the deal for India to get weaponized drones either, though this was reportedly a part of the agenda.

Leaders from India and the United States, which are "major defense partners", met multiple times in recent months to give momentum to their strategic vision of the Indo-Pacific region.

In the last one month, Prime Minister Narendra Modi first met US Vice President Mike Pence. The meeting was then followed by a trilateral meeting involving US President Donald Trump and Japanese Prime Minister Shinzo Abe. Prior to that, earlier this year US Defense Secretary James Mattis met PM Modi. The two nations also had the first '2+2 Dialogue' when External Affairs Minister Sushma Swaraj and Defence Minister Nirmala Sitharaman hosted their US counterparts in New Delhi. The meeting was described as "highly successful" by both countries.

There is a "mutual desire to move positively and quickly" in our defence relationship, Ms Sitharaman told reporters at the Pentagon on Monday, which was her only media interaction during this US visit.

Nirmala Sitharaman, who was accorded a red-carpet welcome during her maiden visit to the US as Defence Minister, was given a rare look-in and briefing into the various aspects of US armed forces. She was also briefed about the US defence industry and the ecosystem that the United States has developed over the last many decades involving the military, strategic thinking community, research, and industrial base.

Ms Sitharaman also visited San Francisco, the hub of innovation and starts ups, where her delegation was given an insight into the American defence research setup and what are the best defence practices that can be adopted by India.

In a first, Defence Minister Sitharaman concluded her US visit with a stop at Hawaii - the headquarters of the US' Indo-Pacific Command. The current situation in Indo-Pacific region was the topic of focus during Ms Sitharaman's visit.

Showing the importance it gives to the partnership with India, the United States had renamed the 'Pacific Command' to 'Indo-Pacific Command', or INDOPACOM earlier this year.

According to news agency PTI, officials said issues like CAATSA and purchase of major defence equipment from Russia, including S-400 missiles, cropped up during the meeting, but the Americans gave an impression that the Trump Administration is "eager than ever" to enhance its defence trade and strategic ties with India.

While making it clear that India can buy weapons from any country it sees fit, the American leadership suggested that New Delhi should select the US over other countries in cases where India's requirement is met by them.

Officials said that given India's strategic geographical location, its representatives said they were willing to place orders for the "latest military hardware and technology and not for anything else." The Indian delegation pointed out that in order to get the latest and most advanced military technology, US' existing rules, regulations and legislations have slowed the process of defense acquisition from them.

Further, the officials said India does not want simple defence trade between the two countries. Instead, the focus must be on co-development and co-production, officials said. This would be essential to the India-US defence relationship, they pointed out.

The Americans appeared on the same page, but expressed their sense of frustration over India's defence procurement process.

At the conclusion of Ms Sitharaman's visit, in a statement, US' Indo-Pacific Command said this partnership was "A reflection of the increasing strategic importance of the US-India security relationship and the progress both countries have made in advancing their defence cooperation."

The scope for mutual coordination and collaboration in the Indo-Pacific region continues to grow. Air forces of India and the US are currently conducting a 12-day military exercise in Kalaikunda and Panagarh air bases in West Bengal, with an aim to enhance operational coordination, according to Indian Air Forces officials. The 'Ex Cope India-18' will be the fourth edition in the series of bilateral drills between the Indian Air Force and the US Air Force.

Major changes in the US-India defence partnership so far include India being accorded a 'major defense partner' status in 2016, India being placed in STA-1 category this year, and New Delhi signing the Communications Compatibility and Security Agreement in September.