However, the journey for the 15 girls admitted was certainly not an easy one, as there were 2,500 aspirants vying for laurels. 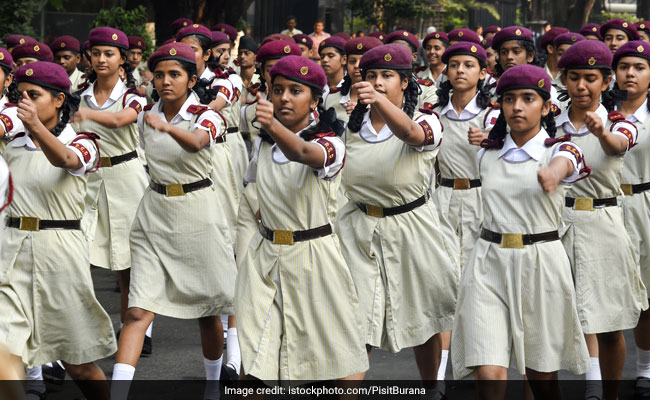 The school principal said the girl students will undergo a strenuous routine.

Lucknow: For the first time in the country, a Sainik School in Lucknow has opened its doors for girls. As many as 15 girls from different family backgrounds have got admission in the Captain Manoj Kumar Pandey Uttar Pradesh Sainik School here in class 9 for the academic year 2018-19.

However, the journey for these girls was certainly not an easy one, as there were 2,500 aspirants vying for laurels.

School principal Col Amit Chatterjee said the girl students will undergo a strenuous routine beginning with PT exercises at 6 am every day and then get ready for assembly prayers at 8.15 am.

"After classes, they will return to their hostel and after a brief rest, participate in sporting events, before taking up studies at 7 PM," he told PTI.

Asked how the girls felt in their new environment, Col Chatterjee said, "They feel very proud to be part of the institution. They aspire to become famous one day in life."

The school's registrar Lt Col Uday Pratap Singh said, "Out of the 2,500 girls who appeared in the entrance examination, 15 were selected based on the results of the written examination and interviews. All these girls have been selected for class 9 for the academic year 2018-19."

"The girls hail from different family backgrounds like doctors, teachers, police officers and even agriculturists," he said.

Mr Singh informed that a proposal to include girl students was sent to the Uttar Pradesh government last year.

"The existing infrastructure of the school has been improved for the 15 girl students using our own resources. One of the boys hostel has been vacated to accommodate the girls," he said.

The registrar was confident that other Sainik Schools in the country will also follow suit.

Commenting on the development, ST Mishra, a teacher at school, said, "The admission of girl students will also prove to be helpful for the boys as its will enable them to adjust and accommodate in the new environment. It will also help in providing a holistic perspective to the boy students."

Initially known as the UP Sainik School, the institute came into existence in 1960, thereby becoming the first such school to be established in the country and has been nurturing young talent for 57 years.

"After this, 27 such Sainik Schools were established in other parts of the country. In its journey of more than 57 years, the school has the honour of producing more than 1,000 military officers, and the first Sainik school in the country whose student was rewarded Paran Vir Chakra (Manoj Pandey)," Mr Singh said.

The school staff feel the move would usher in a new era in the history of the institution.

In July 2017, the Uttar Pradesh Cabinet approved the renaming of Lucknow's Sainik School in the name of Captain Manoj Pandey, who was martyred during the Kargil war.

The school is run by the UP Sainik School Society with chief minister of Uttar Pradesh as its chairperson. It is fully financed by the state government.

Local board of administration (LBA) with the Commissioner, Lucknow Division, as its Chairman and Principal of the school as the Secretary, is responsible for its efficient functioning on day-to-day basis.

This is the only military school in the country that does not come under the Ministry of Defence.

Captain Manoj Pandey was also an alumnus of Sainik School. He was an officer of 1/11 Gorkha Rifles who was posthumously awarded India's highest military honour, the Param Vir Chakra, for his exemplary courage and leadership during the Kargil War in 1999.

Promoted
Listen to the latest songs, only on JioSaavn.com
He died during the attack on Jubar Top, Khalubar Hills in Batalik Sector, Kargil. His actions have led to him being referred to as the "Hero of Batalik".

The school staff feel the move would usher in a new era in the history of the institution. It is the first Sainik School in India that was established in 1960 and has been nurturing young talent for 57 years.