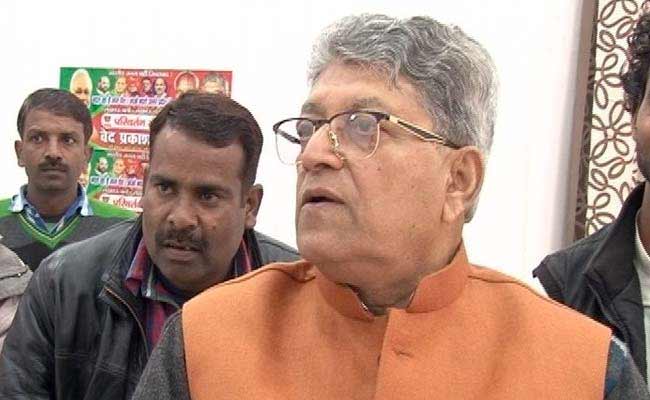 The BJP on Friday released a list of 91 candidates for the Uttar Pradesh Assembly polls, giving tickets to 13 ministers and repeating its sitting MLA in Ayodhya.

The party dropped Co-Operative Affairs Minister Mukut Bihari Verma, whose son Gaurav will be contesting from his Kaiserganj seat in Bahraich.

Earlier, speculations were doing rounds that Adityanath may be contesting from Ayodhya but the BJP decided to field him from Gorakhpur Urban Assembly constituency.

Gupta will again face Samajwadi Party's Tej Narayan, alias Pawan Pandey, whom he had defeated in the 2017 Assembly elections.

Ayodhya will go to the polls in the fifth phase of the elections on February 27.

The list cleared by the BJP's central election committee has names of 13 ministers.

Agriculture Minister Surya Pratap Shahi has also found a place in the list and he will contest from Pathardeva.

Eight women also made it to the list of the candidates.

The BJP has given ticket to Nagendra Pratap Singh 'Chhote Sarkar' from Rampur Khas in Pratapgarh to take on Congress Legislative Party leader Aradhana Misra.

Misra and UP Congress president Ajay Kumar Lallu are the only two MLAs who are still in the party, which had won seven seats in the 2017 Assembly polls. The BJP has given ticket to Sindhuja Mishra from Kunda, a constituency that frequently hits the headlines because of "bahubali" (muscleman) politician Raghuraj Pratap Singh, alias Raja Bhaiya.

The BJP has also given tickets to Rakesh Sachan from Bhoginipur in Kanpur Dehat and Subhash Rai from Jalalpur.