Sulabh Shrivastava's death has been slammed by the Congress, with Priyanka Gandhi Vadra hitting out at Chief Minister Yogi Adityanath and his government

Sulabh Shrivastava: Just a day before his death he wrote to police saying he felt threatened

A television journalist based in Uttar Pradesh's Pratapgarh district died Sunday night in what the police have called a "motorcycle accident".

Just a day before his death, Sulabh Shrivastava, who worked for ABP News and its regional arm, ABP Ganga, wrote to senior police officials saying he felt threatened following his recent reportage of liquor mafias in the district.

"Mr Shrivastava was returning on his motorcycle after media coverage, at around 11 pm at night on Sunday. He fell from his motorcycle near a brick kiln. Some labourers lifted him from the road and then used his phone to call his friends, and they called an ambulance too. He was taken to the district hospital where the doctors declared him dead," Surendra Dwivedi, a senior police official in Pratapgarh, said in a statement.

"Initial investigations have revealed he was alone on his bike and fell after his bike collided with a handpump by the road. We are investigating other angles too," Mr Dwivedi said in the statement.

A photograph of the body - taken at the scene of the "accident" - shows the journalist lying on the ground with what appear to be injuries to his face. His clothes seem to have been taken off - his shirt has been almost entirely removed and his trousers unbuttoned and pulled down. 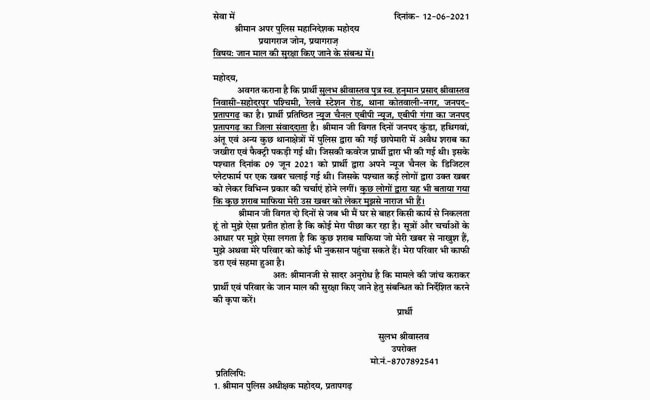 Mr Shrivastava's wife, Renuka Shrivastava, on Monday, filed a case against unknown people, alleging that the the liquor mafia had her husband murdered.

She alleged that her husband, after reporting on the liquor mafia, had received threats to his life for three days, and that the police had taken no action despite being informed of the threats in writing.

She said that on Sunday her husband had left to cover news about an illegal arms factory and was gone all day when, at 11 pm, she received news about his "motorcycle accident".

She said she rushed to the hospital only to find he had already died, and, in her complaint, accused the mafia of killing him over his coverage of their illegal activities.

The letter Mr Shrivastava reportedly wrote to the police - telling them he feared for his life - has now surfaced on social media and been tweeted by senior journalists from his former channel.

"A report of mine against the liquor mafia in the district had run on the news portal run by my channel on June 9. Since then there has been a lot of buzz about this report. When I leave my home I feel as if someone is following me... I have heard through my sources the liquor mafia is unhappy with my reporting and can harm me. My family is also very worried," Mr Shrivastava had said in that letter.

Prem Prakash, a senior police official from the area, told ABP News in a phone-in interview he had been aware of the letter and had instructed local officials to evaluate the threat.

Mr Shrivastava's death has been slammed by the opposition Congress, with Priyanka Gandhi Vadra hitting out at Chief Minister Yogi Adityanath and his government.

"The liquor mafia has killed from Aligarh to Pratapgarh but the UP government is silent. Journalists are asking dangerous questions to expose the truth. The government is asleep," she tweeted.

"Does the UP government, which nurtures 'jungle raj', have any answer to the tears of the family members of journalist Sulabh Shrivastava?" Ms Gandhi Vadra asked.

Bengal Chief Minister Mamata Banerjee also tweeted to express her shock and condolences, saying it is "sad... that we are unable save lives who are working tirelessly towards unfolding the truth".

Shocked at the demise of ABP journalist Sulabh Srivastava in Uttar Pradesh.

Sad to see that despite "democracy & freedom" being a part of our ethos, we are unable to save lives who are working tirelessly towards unfolding the truth.

"Shocked at the demise of ABP journalist Sulabh Srivastava in Uttar Pradesh. Sad to see that despite "democracy & freedom" being a part of our ethos, we are unable to save lives who are working tirelessly towards unfolding the truth," Ms Banerjee tweeted.