Out On Bail, Man Accused Of Sex Assault Kills Woman's Father In UP

UP Hathras Shooting Incident: One person has so far been arrested in the case.

The woman's father died on the way to hospital.

A man who was jailed briefly in 2018 in a sex assault case, out on bail ever since,  allegedly shot dead the survivor's father on Monday in a village in Uttar Pradesh's Hathras district, about 200 km from Delhi.

An argument at around 4:30 PM on Monday, the Hathras Police said, between the family of the survivor and the accused's family outside a village temple ended up in the shooting incident, leading to the death of the survivor's father on way to hospital.

In a detailed statement on social media, the Hathras Police said Gaurav Sharma, the accused, was jailed for a month in 2018 after a molestation case was filed against him by the woman's father. He was granted bail by a local court after a month and had been out of the prison since then.

"The man who died had filed a case against Gaurav Sharma in July 2018 for molestation. The accused went to jail and got bail after a month. Since then, both families were hostile to each other. The wife and aunt of the main accused had gone to a village temple to pray where both daughters of this man were present. The women had an argument. The accused - Gaurav Sharma - and the woman's father intervened and the argument between the men intensified. After this, Gaurav flew into a rage and called some boys form his family to the scene and shot at the man," Hathras Police chief Vineet Jaiswal said in a video statement released on Twitter.

One person, a family member of Gaurav Sharma, has so far been arrested in the case. Asking officials to take strict action in the case, Chief Minister Yogi Adityanath has given directions to officials to invoke the tough National Security Act against all the accused involved in the case, news agency ANI reported.

Videos shot by local journalists on Monday showed the survivor crying outside a police station and demanding justice.

"He used to keep threatening us to take back the case. My father had refused earlier. My younger sister and I had gone to the local temple... he and his wife and two relatives were there, and they started passing comments on us. So we left the place," the woman told reporters.

"We went to our fields where my father was getting potatoes harvested. Then, these people reached there too and he (Gaurav) started commenting on me again. I then countered him. He and his relatives then misbehaved with me. My father then made them leave. They threatened us before leaving. Two hours later, around 3:30 pm, he came with a car  and about 4-5 people came and shot my father," she added.

On his Facebook page, the accused has put up multiple photos calling himself a "Samajwadi Party leader".

The latest such post was put up on February 27, where the accused called for people to attend a farmer's meeting called by SP Chief Akhilesh Yadav on March 3 in Aligarh. 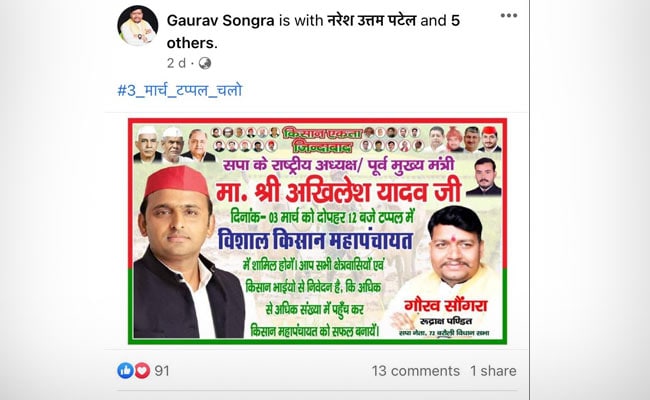 In a tweet, Samajwadi Party spokesperson Juhie Singh said the accused is "not an office-bearer or a spokesperson.  "The accused was neither an officer bearer nor a spokesperson. For us, he was just a criminal who molested a daughter and killed the father. In the present government, such culprits are increasing. Despite the daughter's complaint, this raises questions on the commitment of the the state to women's safety," she wrote in Hindi.

Another party leader later tweeted photos of the accused with a UP BJP MP from Aligarh.

In September last year, a 20-year-old Dalit woman was raped by four men from the so-called upper caste community in Hathras in an incident that had shocked the entire nation.

She later died due to her injuries at a hospital in Delhi. Police had come under widespread criticism over the handling of the case and a late-night funeral of the victim where the family said they were not allowed.

The four accused in the case have been charged for gang-rape and murder after an investigation by the CBI. The CBI has also invoked charges against the accused under the SC/ST (Prevention of Atrocities) Act.