Political Jibes On UP In Verses: BJP's Ravi Kishan vs Singer Neha Rathore

BJP leader Ravi Kishan, who rose to popularity as a Bhojpuri actor and singer, has come up with a song, praising Chief Minister Yogi Adityanath's efforts for the state in the last five years. 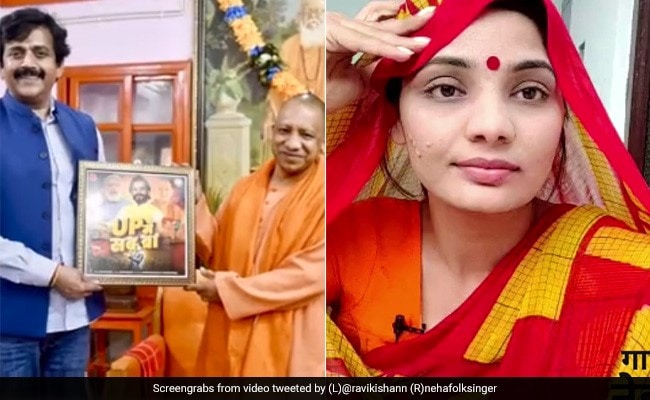 UP Elections: Ravi Kishan and Neha Rathore are engaged in a battle of songs.

From speeches to songs - political jabs and jibes are adding entertainment and flavour ahead of Uttar Pradesh's seven-phase Assembly election.

BJP leader Ravi Kishan, who rose to popularity as a Bhojpuri actor and singer, has come up with a song, praising Chief Minister Yogi Adityanath's efforts for the state in the last five years.

The song - "UP me sab ba" ("UP has everything") - talks of the recently inaugurated projects in the state like airports in Kushinagar and Jewar. The opposition had earlier slammed the BJP's "double-engine" government - at the state and centre - for, what the leaders called, rushed launch of the projects ahead of the polls.

Ravi Kishan has also praised the state government for its handling of the pandemic, efforts to spread literacy, among other things. The endnote is an appeal to voters - to bring back BJP to power.

#UpMeinSabBa Full song out now click the link below to watch.

But the claims in the song have now been countered by another Bhojpuri singer - Neha Rathore. She is talking about every incident that the opposition has cited to call out Yogi Adityanath for his "misrule".

The 23-year-old singer has launched a sharp attack on the Chief Minister over the viral photos of bodies found in Ganga at the peak of the second wave, the Hathras rape incident, and even the farmers' killing in Lakhimpur. The title of her song too is a counter to Ravi Kishan's - "UP me ka ba" (What's there in UP?".

It was shared by Maharashtra Minister Nawab Malik on Twitter, whose Nationalist Congress Party is fighting the polls with Akhilesh Yadav - he has emerged as the key challenger in the state election.

But the war of songs doesn't end here. Another BJP MP Manoj Tiwari has also come up with a song, "Mandir ab banane laga hai, bhagwa rang chadhne laga hai (The temple construction has started, it's saffron everywhere)" - the song is on the construction of Ram Temple in Ayodhya, which the BJP counts as its biggest achievement.

While the musical notes are being taken a notch higher, political parties are in an attempt to put their best foot forward ahead of the first phase on February 10. The results will be out on March 10.