UP Bypoll: Mr Yadav also claimed that the district administration and the police conducted raids on the residences of his party workers. 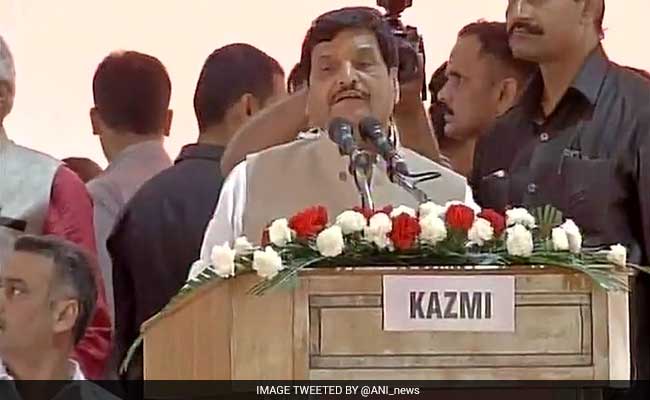 Shivpal Yadav alleged that drones are being used to monitor his party workers. (File)

A day ahead of the Mainpuri Lok Sabha bypoll, Pragatisheel Samajwadi Party (Lohia) president Shivpal Singh Yadav on Sunday alleged drones are being used to monitor his party workers and his home.

Mr Yadav also claimed that the district administration and the police conducted raids on the residences of his party workers.

"Drones are being used to monitor our party workers and those who live in our house. The SS Memorial School, our residence, and the places where we halt are being raided. This is breach of privacy," he told reporters.

"We are in touch with the district magistrate and the senior superintendent of police," Mr Yadav said, adding, "The elections are in favour of Dimple Yadav."

In the Mainpuri Lok Sabha seat, Samajwadi Party founder Mulayam Singh Yadav's family is locked in a high-voltage contest with the BJP to hold on to its pocket borough. Mulayam Singh Yadav's elder daughter-in-law Dimple Yadav is the SP candidate in Mainpuri while BJP has fielded Raghuraj Singh Shakya, a former confidant of Mulayam's brother Shivpal Singh Yadav.

"He has got a strong message of defeat in the Mainpuri bypolls. His aura in Jaswant Nagar is all set to crumble. Now, since they are searching for a possible excuse for the defeat, they sometimes blame EVMs, sometimes the Election Commission, and now they are levelling allegations over the use of drones," Mr Shukla said.

The BJP leader said there was no use of offering such "childish allegations" as the people have become aware and were going to reject those who indulge in dynastic and casteist politics.

Polling in Mainpuri will be held on December 5, and counting of votes will take place on December 8.

The Mainpuri parliamentary constituency has the five assembly segments of Mainpuri, Bhogaon, Kishni, Karhal and Jaswant Nagar. In the 2022 assembly elections, the SP won the Karhal, Kishni and the Jaswant Nagar seats, while the BJP won the Mainpuri and the Bhogaon seats.

Akhilesh Yadav's Karhal assembly seat is part of Mainpuri Lok Sabha constituency and so is Jaswant Nagar, which is represented by Shivpal Yadav.

Taking a dig at Shivpal Yadav's statement, vice-president of UP BJP Dinesh Chandra Sharma told PTI, "The statement made by Shivpal Yadav shows his desperation ahead of an electoral defeat. His allegations are completely baseless." A direct contest between the BJP and Samajwadi Party is on the cards in the Mainpuri parliamentary bypolls. The BSP and the Congress are not contesting from the seat.

According to a statement issued by the office of Uttar Pradesh's Chief Electoral Officer, 24.43 lakh people will exercise their voting rights in the bypolls.