Priyanka Gandhi Vadra visited Unnao to meet the family of the young woman who was set on fire by her alleged rapists and died in Delhi's Safdurjung hospital last night. 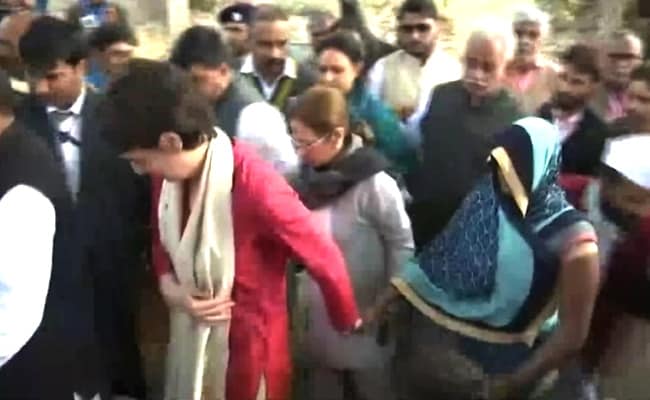 Congress leader Priyanka Gandhi Vadra today visited the family of a young woman in Uttar Pradesh's Unnao, who died last night at a hospital in Delhi after she was set on fire by the men who had allegedly raped her.

She assured the family members that she was with them in this difficult time.

"The victim's whole family has been constantly harassed since last year. I have heard the culprits have some BJP connection. That is why they were being shielded. There is no fear among criminals in the state," Ms Gandhi Vadra was quoted as saying by  news agency ANI.

Priyanka Gandhi asked why was the 23-year-old woman not given any security after a similar incident in Unnao, referring to another such attack in the district in July when the car in which a woman who had accused MLA Kuldeep Singh Sengar of rape, was hit by a truck.

"What action has been taken on the police official who refused to register an FIR? What steps are being taken by the government to stop crime against the women, which take place on a daily basis?" she asked in a tweet.

In another tweet, Priyanka Gandhi prayed to give courage to the family members.

The Congress general secretary also said that it is everyone's collective failure as a society that the woman was not able to get justice. "At the social level, we all are guilty, but at the same time, this also points out to the hollow law and order mechanism in UP," she tweeted.

The woman, who had suffered 90 per cent burns after she was set on fire on Thursday, died of a cardiac arrest at the Safdarjung Hospital at 11:40 pm yesterday, where she had been air-lifted to from Uttar Pradesh on Thursday evening.

The woman's body was transferred to the hospital's forensic department where an autopsy was conducted. Her body is being taken from Delhi to her village in Unnao by road. The autopsy reports will be given to the police, hospital sources said.