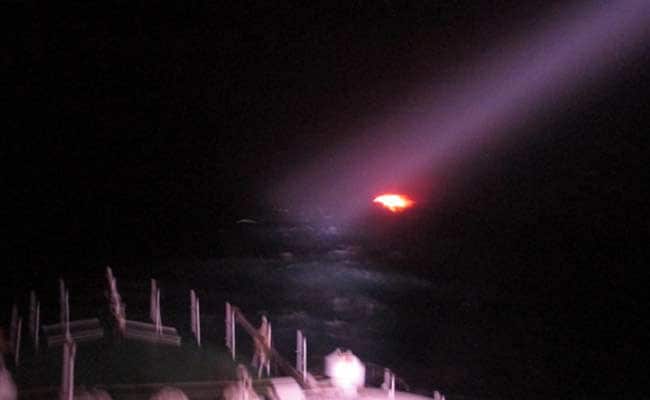 The boat was intercepted off Gujarat coast.

New Delhi: A Pakistani boat blew itself up off the Gujarat coast on New Year's Eve. This is the text of the press release issued by the Defence Ministry.

An intelligence based midnight operation was conducted on the intervening night of Dec 31 and yesterday by the Indian Coast Guard ships and aircraft to intercept a suspect fishing boat in Arabian Sea near Indo-Pak maritime boundary, approximately 365 km from Porbander. (Pakistani Boat With Explosives Blows Up Off Gujarat Coast, Says Government)

As per the intelligence inputs received on 31st December, a fishing boat from Keti Bunder near Karachi was planning some illicit transaction in Arabian Sea. Based on the input, Coast Guard Dornier aircraft undertook sea - air coordinated search and located the suspect fishing boat. Thereafter, the Coast Guard ship on patrol in area was diverted and intercepted the unlit boat at about midnight of 31st December in position 365 km West-South West of Porbandar. (Pak Boat was Blown Up Deliberately, Says Coast Guard: 10 Facts)

The Coast Guard ship warned the fishing boat to stop for further investigation of the crew and cargo; however, the boat increased speed and tried to escape away from the Indian side of maritime boundary. The hot pursuit continued for nearly one hour and the Coast Guard ship managed to stop the fishing boat after firing warning shots. Four persons were seen on the boat who disregarded all warnings by the Coast Guard ship to stop and cooperate with investigation. Soon thereafter, the crew hid themselves in below deck compartment and set the boat on fire, which resulted in explosion and major fire on the boat. (18-Hour Operation to Find and Stop Pak Boat: 10 Points)

Promoted
Listen to the latest songs, only on JioSaavn.com
Due to darkness, bad weather and strong winds, the boat and persons on board could not be saved or recovered. The boat burnt and sank in the same position, in early hours of 1st January. Coast Guard ships and aircraft are continuing operations in area to search for any possible survivor. Coast Guard and other security agencies are maintaining high vigil in maritime and coastal areas since last couple of months due to several inputs on threat from the sea.