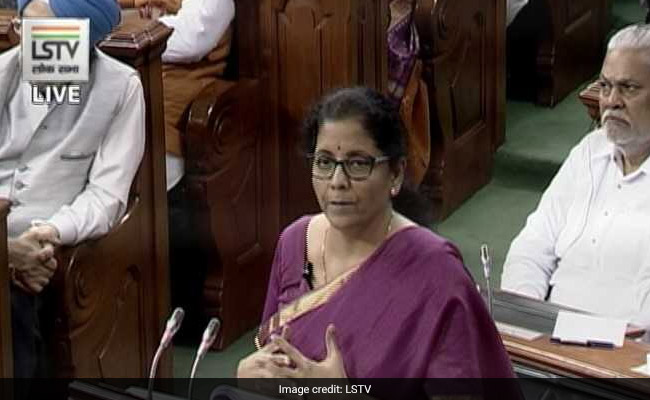 The finance minister quoted Basaveshwara on principles of "Kayaka" and "Dasoha"

Ms Sitharaman began the presentation of her budget by quoting from the "Chanakya Neeti".

Nirmala Sitharaman, who served as defence minister in the first government led by PM Modi, presented her first budget at a time when India has lost its top spot as the world's fastest-growing major economy, and faces a challenge to meet the Prime Minister's target of becoming a $5 trillion economy by 2024-25.

She drew from Swami Vivekananda when discussing women's empowerment. "There is no chance of the welfare of the world unless the condition of women is improved. It is not possible for a bird to fly on one wing."

In her speech the finance minister allocated a sum of Rs 29,000 crore for the Women and Child Development Ministry headed by Smriti Irani. The amount represented a 17 per cent increase over funding for 2018/19 fiscal year.

The finance minister, who is a Rajya Sabha member from Karnataka, also quoted extensively from the work of 12th century Kannada social activist and philosopher Lord Basaveshwara, who is also known as Basavanna.

Ms Sitharaman, 59, quoted Basavanna on his socio-economic principles of "Kayaka (work as something divine)" and "Dasoha (equal pay for equal work)" when discussing measures to reduce unemployment figures and help with skill training for the nation's youth.

The first of these - "Kayaka" - says that every member of society should take up a job of his/her choice and carry out the task as sincerely as possible. There must be no discrimination in the choice of vocation. The second - "Dasoha" - refers to the expectation of proper pay for the work done. More importantly, it says that the income earned must not be hoarded; surplus income must be treated as gifts to the poorer members of society.

Earlier this year, PM Modi praised Basavanna, on the occasion of his 914th birth anniversary. PM Modi described the philosopher as an "iconic thinker" and "pioneering social reformer".

"Paying homage to the venerable Bhagwan Basaveshwara on his Jayanti. An iconic thinker and pioneering social reformer, Bhagwan Basaveshwara worked throughout his life to make our society more inclusive. His emphasis on education and serving the poor continues to motivate millions," the Prime Minister tweeted.

Paying homage to the venerable Bhagwan Basaveshwara on his Jayanti. An iconic thinker and pioneering social reformer, Bhagwan Basaveshwara worked throughout his life to make our society more inclusive. His emphasis on education and serving the poor continues to motivate millions.

Ms Sitharaman began her presentation of the budget by reciting a few lines of an Urdu poem written by the late Manzoor Hashmi.

"yakeen ho to koi raasta nikalta hai, hawa ki ot bhi le kar charagh jalta hai (if you are determined you will see a way. The lamp burns bright even in the wind)," she said.

The finance minister also quoted from a Sangam-era Tamil written by Pisir Aandhaiyaar before the second part of her speech, which dealt with taxation measures.

What the minister said in Tamil was: " An elephant will be happy to have two mounds of rice from a paddy field. But if it enters the land, it will have far less to eat than it will trample."

When Can People See Cheetahs Brought From Namibia? PM Has An Answer