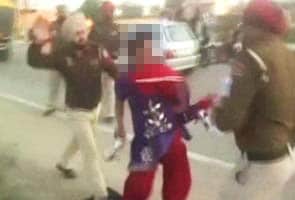 Chandigarh/Amritsar: Hours after getting a rap on the knuckles by the Supreme Court, the Punjab Police has arrested two constables who were caught on camera brutally thrashing a young woman last week.

The two constables had, so far, only been placed under suspension after they were filmed on a cell-phone by a passer-by, mercilessly beating the woman in full public view in Tarn Taran near Amritsar. The video was broadcast on news channels including NDTV.

But the Supreme Court today rejected the Punjab government's explanation on how it would investigate the erring police officers.

"Was she a terrorist?" the judges had asked angrily.

The state government said that a magistrate will determine accountability for the beating on the roadside.

"What will the inquiry do?" asked the angry judges. "It (the assault) has been seen by millions of people... our experience shows the policemen will be reinstated after 3 months," they said.

The head of the Punjab police force has been ordered to submit details of how the police officers who attacked the woman have been penalised.

Her family says that she was hit after she complained of sexual harassment by a truck driver. The police said that she tried to prevent them from arresting her father, who was allegedly drunk in public, but acknowledged that the attack on her was unjustifiable.

Promoted
Listen to the latest songs, only on JioSaavn.com
The Supreme Court also made the point that while the young woman was being beaten, nobody tried to help her. "What is the accountability of citizens? People were standing around...what were they doing? Are we becoming a senseless society? This happens every day in all parts of the country," they said.

Last week, the court demanded explanations for police brutality from the governments of Punjab and Bihar, where teachers protesting for a pay hike in Patna were hit by constables with batons and tear gas.