"Our Effort Not To Penalise Great Strategic Partners Like India": Pompeo

The United States and India are seeking to build ties, despite areas of tension, and announced a major new communications security agreement. 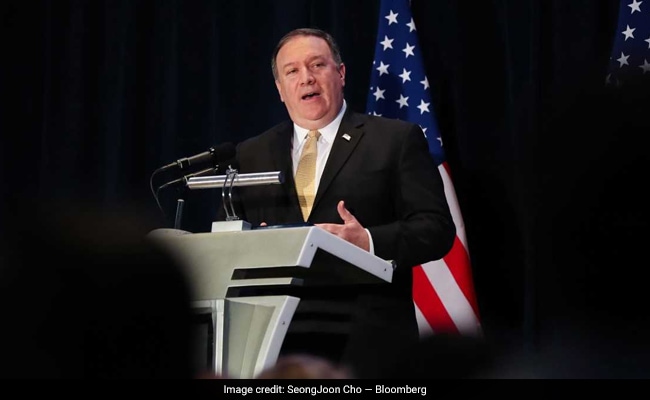 Mike Pompeo said the relationship between the US and India has entered "a new era.

Secretary of State Mike Pompeo and Defense Secretary Jim Mattis praised the deepening ties between the world's two largest democracies after their first joint meeting with their Indian counterparts in New Delhi.

The relationship between the United States and India has entered "a new era," Pompeo said, adding that Thursday's meeting is "symbolic of our increasingly close partnership."

The two nations announced the signing of a major communications security agreement that had been under discussion for more than a decade. The agreement will allow India to receive military-grade communications equipment from the United States and permit exchanges of real-time encrypted information on platforms used by the two countries' armed forces.

They also announced a series of measures aimed at building defense ties. A hotline will be established between Mattis and Nirmala Sitharaman, India's defense minister, and the two countries will hold a joint exercise involving all three branches of their militaries off the east coast of India next year.

At a grand strategic level, both the United States and India are eager to develop closer ties. Each views the other as a useful partner in checking China's ambitions in Asia. Sales of US military equipment to India have increased considerably over the past decade.

But in realms apart from defense, the relationship has progressed more haltingly. India is one of many targets in President Donald Trump's crusade to reduce the U.S. trade deficit, and the two countries have imposed tit-for-tat tariffs. The Trump administration is pushing India to increase its imports of U.S. goods and to drastically reduce its purchases of Iranian oil or face sanctions.

Thursday's meeting, which was postponed twice by the Trump administration, aimed to highlight areas of agreement rather than disagreement. Pompeo, making his first trip to India as secretary of state, struck a conciliatory tone in remarks to reporters after a half day of meetings in Delhi.

Many countries, including India, "are in a place where it takes them a little bit of time to unwind" oil imports from Iran, he said. "We'll work with them, I'm sure, to find an outcome that makes sense."

He also said the United States would work with India on another area of concern - India's upcoming purchase of a Russian missile and air-defense system known as the S-400. The purchase will violate sanctions instituted by Congress on arms purchases from Russia, but lawmakers have allowed the possibility of a presidential waiver.

Pompeo said no decision has been made on a waiver. But "we do understand the history of India's relationship with Russia," he said. "Our effort here is not to penalize great strategic partners like India."