"Muslims in India should not panic as the CAA will not take away anyone''s citizenship," minister Giriraj Singh said. 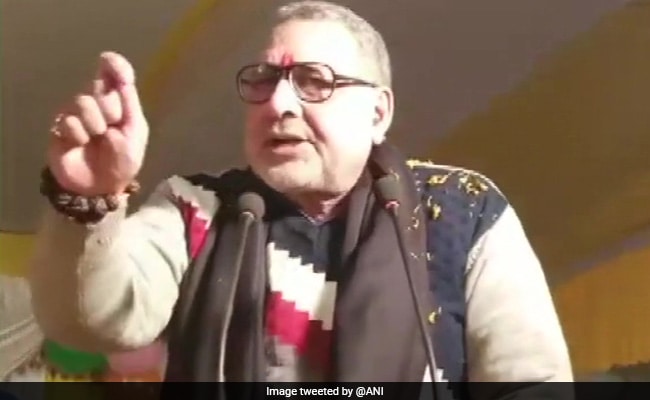 "Should Hindu and Sikh refugees from Pakistan be denied citizenship?" Giriraj Singh asked

"The JNU has become a hub of tukde-tukde gang, which has Rahul Gandhi, Arvind Kejriwal, Left and communists," Mr Singh told reporters in Odisha's Sambalpur.

Cornering opposition parties for protesting against the CAA, the Union Minister asked them, particularly Congress whether Rohingyas and Pakistani infiltrators should get Indian citizenship and not the Hindu and Sikh refugees from the neighbouring country.

"I would like to ask the Congress and the tukde-tukde gang whether Rohingyas, Pakistani infiltrators should be given citizenship? And should Hindu and Sikh refugees from Pakistan be denied citizenship?" he said.

Stressing that the members of the minority community are being attacked in Pakistan and many temples have been demolished there, he said, "Muslims in India should not panic as the CAA will not take away anyone''s citizenship. However, those infiltrating into the country would not get it."

He claimed that confusion over the CAA is due to protests by some parties like the Congress, who have been trying to "spread false information about the new act and create disturbance in the country."

Protests have been happening across the country ever since the law received the presidential assent last month. Maharashtra, Madhya Pradesh, Rajasthan Kerala and West Bengal government have said that CAA will not be implemented in their states.

The newly-enacted law grants citizenship to Hindus, Sikhs, Jains, Parsis, Buddhists and Christians fleeing religious persecution from Pakistan, Afghanistan and Bangladesh and who came to India on or before December 31, 2014.