The BJP stunned the Left, in power in Tripura for the last 25 years, winning 43 of the state's 60 seats along with a regional partner Indigenous People's Front of Tripura (IPFT) in assembly elections, results for which were announced on Saturday. 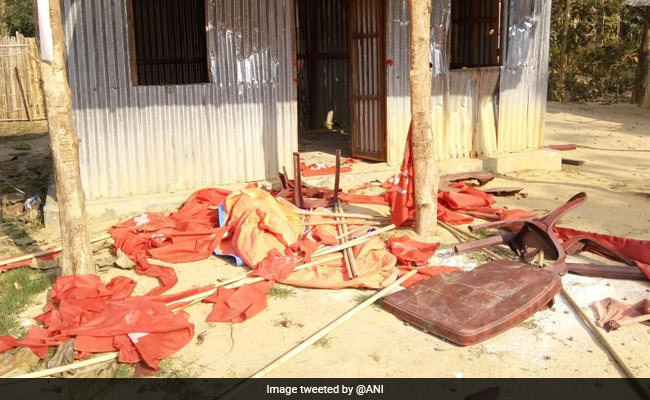 CPI(M) offices were vandalised in different locations in Tripura.

A statue of Lenin was razed in Tripura days after the BJP stunned the Left, which was in power in the state for the last 25 years. The Russian revolutionary's statue was in the heart of Belonia town in south Tripura, 90 km from capital Agartala. The Tripura police today said it has received four complaints of "post-poll" violence from various parts of the state since last night. The BJP won 43 of the state's 60 seats along with a regional partner Indigenous People's Front of Tripura (IPFT) in the assembly elections. Tripura was considered the Left's strongest citadel, presided over by the CPM's Manik Sarkar, 69, who had been chief minister for 20 years and was seeking re-election for the fifth consecutive term.

Here are the updates on the clashes in Tripura: 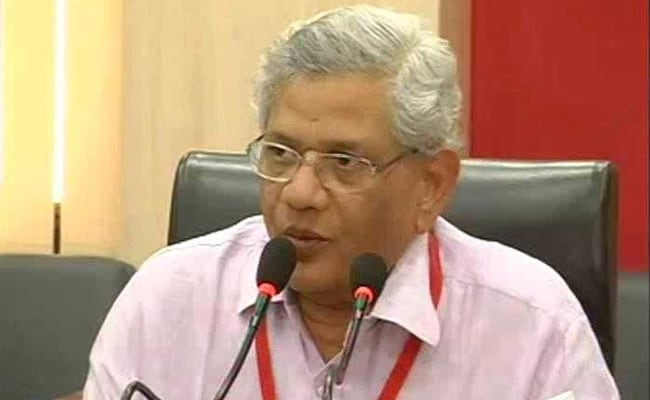 Biplab Deb, Set To Be Tripura Chief Minister, Says, "People Are My Dal Roti"
Over breakfast this morning Biplab Deb, who speaks only in Hindi and Bengali, talked to NDTV about the priorities of his new government and his new role after spending years as a Rashtriya Swayamsevak Sangh (RSS) volunteer, saying, "People inspire me...they are my Dal, Roti (staple)."
Mar 06, 2018 13:54 (IST)
JD(U) leader Sharad Yadav tweets: Demolishing d statue of Lenin in Tripura just after BJP into power is an attack on Indian Freedom Movement. Highly condemnable.Bhagat Singh & his Comrades inspired from Lenin while d B.J.P & his affiliated organisations, big ? Whatever being happened is very dangerous in d nation
Mar 06, 2018 13:23 (IST)
CPI-M leader Haripada Das said the statue was set up a year ago in Belonia, South Tripura's district headquarters, around 90 km from Agartala.
Mar 06, 2018 13:22 (IST)
Tripura Governor Tathagata Roy, in a tweet said: "What one democratically elected government can do another democratically elected government can undo. And vice versa."
Mar 06, 2018 13:16 (IST)
Biplab Deb has been elected by party legislators as their leader in the state assembly and is expected to take oath as chief minister on Friday, March 9 at a grand ceremony likely to be attended by Prime Minister Narendra Modi and where the BJP plans to showcase its many chief ministers from around the country.
Mar 06, 2018 13:02 (IST)
SUCI protest against the bringing down of the Lenin statue in Tripura at 4.30 pm in Bangalore today.
Mar 06, 2018 12:37 (IST)
Sunil Deodhar, the BJP's Tripura in-charge, to NDTV: We are against this intolerance of any kind and we don't support this... Those who did this are not party workers. They are common man (sic).
Mar 06, 2018 12:32 (IST)
Prime Minister Narendra Modi, addressing the BJP Parliamentary Party meeting today, called the BJP's win over the Left in Tripura a "victory of ideology" and said the party needs to work hard to maintain its winning electoral streak.
Mar 06, 2018 12:12 (IST)
Section 144 imposed in several violence affected areas in Tripura: news agency ANI
Mar 06, 2018 11:54 (IST)
Sitaram Yechuri to address the media at 2.30 today.
Mar 06, 2018 11:54 (IST)
All CPM leaders attending the state conference will march from venue to Lenin statue in Kolkata at 4.30 pm.
Mar 06, 2018 11:17 (IST)
Three people have been arrested over the last 48 hours in Tripura, for what the police has described, as "post-poll' violence. The police said on Monday that it had received four complaints of violence from various parts of the state since Sunday night.
Mar 06, 2018 10:37 (IST)
Home Minister Rajnath Singh today spoke to the state governor and the DGP and asked them to ensure peace till a new government is installed, an official said.
Mar 06, 2018 10:29 (IST)
Left party Socialist Unity Centre of India (Communist) to hold protests in Kolkata this afternoon against the razing down of Lenin's statue in Tripura.
Mar 06, 2018 09:51 (IST)
BJP does not ever practice culture of violence. In places like Tripura, Left parties have chosen to be silent about 11 BJP workers who were killed. Some of those who support Left parties are trying to foist these kind of debates that a statue is removed: Nalin Kohli of the BJP.
Mar 06, 2018 09:39 (IST)

Left, BJP Blame Game Over Tripura Post-Poll Violence, Lenin Statue Razed
The CPI(M) alleged BJP workers have gone on a vandalism spree in the last 48 hours. The state BJP has hit out, alleging people posing as BJP workers are behind the violence; Home Minister Rajnath Singh has spoken to the Governor and police chief, asking them to stop violence.
Mar 06, 2018 09:31 (IST)
"The cases include arson at two CPI(M) offices in the Sidhai area in West Tripura district, 25 km from here, and clashes between CPI(M) and BJP supporters at Kadamtala in North Tripura district," Superintendent of Police (Control) Pradip De said.